The Coronavirus and Astrology, Part 1

At the very foundation of astrology lies the age-old principle, first articulated by the legendary Hermes Trismegistus:

As above so below. As below so above.

At the moment, 26th January 2020,  the media is awash with news of the Coronavirus. What we would expect to see, given the premise of astrology mentioned above, is that the Coronavirus will be shown in the heavens and on earth at the same time.

The first suspected cases were notified to the WHO on 31 December 2019, with the first instances of symptomatic illness appearing just over three weeks earlier on 8 December 2019. 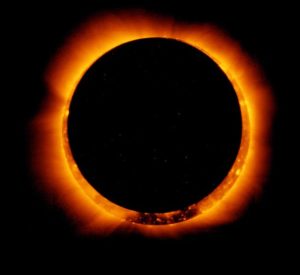 So what significant events were taking place in the heavens between these dates?
There was an annular solar eclipse on Boxing Day, December 26 2019.

An annular solar eclipse is when the Moon is further away from the earth than normal and does not completely cover the Sun‘s disk. The result is a corona on the outside rim of the Sun‘s disk.

The main feature of an annular eclipse is the corona, the ‘rim of fire’, that surrounds the blackened disk of the Moon.

On the right is an image of the coronavirus cell. Notice any similarity? Yes they are different but what they have in common is the outer corona rim. 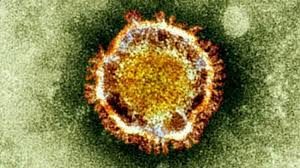 This similarity is an extraordinary reflection of the “As above so below. As below so above.” foundation principle of astrology mentioned above. It’s literal, obvious, and striking.

The centre of the coronavirus epidemic began in Wuhan China, where the annular solar eclipse was partially visible.

The chart for the eclipse set for Wuhan China shows Saturn, the greater malefic, very close to the MC. The lights conjoin Jupiter, the greater benefic in one of his more debilitated states.
Just 2 weeks later, on the 12th January 2020, Saturn conjoined Pluto. Their synodic cycle is approximately 35 years. 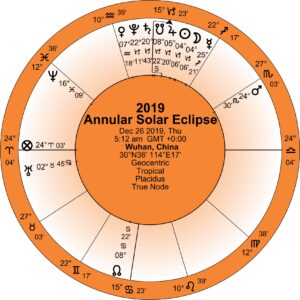 So does this mean that the eclipse caused the coronavirus to appear?

No. Such a presumption suggests a cause-and-effect scenario, where the celestial bodies make things happen on earth. Those new to astrology would be excusued from thinking this way because many astrologers talk about the ‘influence’ of the planets. This way of speaking, while good for attracting dramatic attention and creating a funnel for sales, is quite misleading.