You are here: Home / The qualities 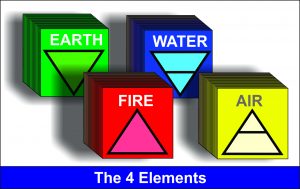 In order to understand the various aspects of astrology, such as the planets, the signs and temperaments, it is first necessary to study the underlying foundations – the constituent parts.
The planets and the signs are each made up of a combination of the four elements: fire, air, earth and water.

The astrological elements used in the Western astrology are Greek in origin. According to the Greeks almost anything in the universe could be classified according to one of the four elements: fire, earth, air and water.

The system of elements and qualities was articulated by Aristotle in 350 BC and had been formulated at least 200 years before.

This model of the composition of reality was based on the changing cycles of the seasons. Seasonal change was seen as dynamic and the result of an interchange of qualities.

These qualities describe and explain: 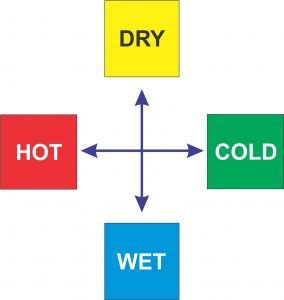 The primary qualities operate as polarities. Hot and cold are dynamic qualities, sometimes called ‘active qualities’.
They are associated with active outgoing energy.

The interaction between hot and cold generates 2 new qualities: dry and moist, which are sometimes called passive qualities, are associated with receptive inert energy.