Blog - Latest News
You are here: Home / Coronavirus and Astrology: Part 4: The end of the Virus Crisis

At the time of writing travel restrictions are being applied by various countries around the world. Trump has just announced a 30 day ban on travellers from the European mainland. India is going to stop issuing visas.

In Astrology and the Coronavirus Part 3: Saturn I identified Saturn as the common link between most horoscopes relevant to the corona virus. Saturn rules walls blocks and restrictions of all kinds, including quarantine and isolation, whether voluntary or involuntary. While there is a case for including Jupiter and Pluto as ‘the culprit’, it is Saturn which rules all these planets.

Jupiter crashes down to reality

I think one planet that has been overlooked in discussions is Jupiter, the planet of travel, freedom and liberty. It moved into the sign of Capricorn, which is ruled by Saturn, in early December 2019, just as the first cases of the virus were being reported, and soon after Chinese government imposed restrictions in and out of Wuhan. In Capricorn Jupiter is at its lowest point, with its viewpoint restricted to the most mundane of realities. In Capricorn it no longer has access to unfettered idealism, lofty philosophy, or freedom of movement.

Jupiter’s entry in Capricorn has coincided with travel restrictions around the world as well as restrictions on educational institutions and large social gatherings. Because these restrictions are imposed to prevent the spread of the pandemic, I am looking to when Jupiter moves out of the sign of its fall to signal the beginning of the end of the virus crisis.

Jupiter and the lungs

It is interesting that Jupiter, normally a warm moist planet, represents the lungs, which are also warm and moist. During this time when Jupiter is in its fall the world is is reeling from a pandemic disease associated with the lungs. 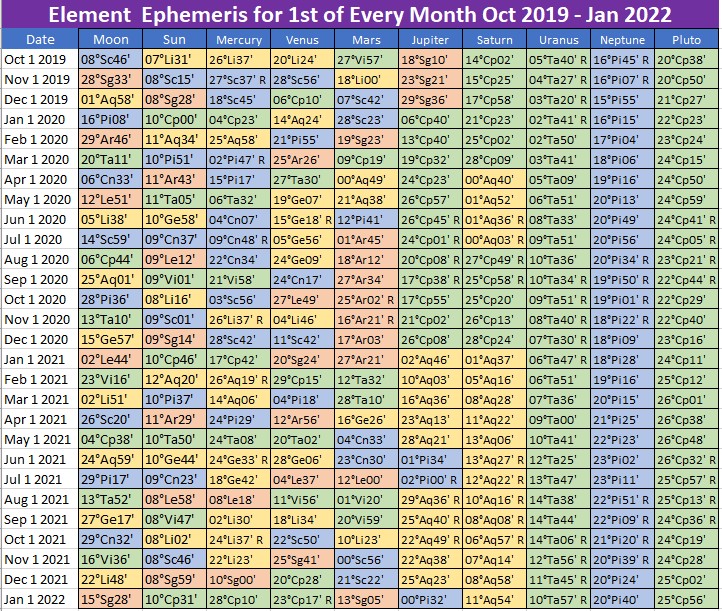 An overview of planets in the elements

The ephemeris on the left lists planet positions for the 1st of every month for a period of just over two years, color coded for the elements. Pink is for fire signs, green for earth, yellow for air and blue for water. At a glance a dominance of a particular element is evident. 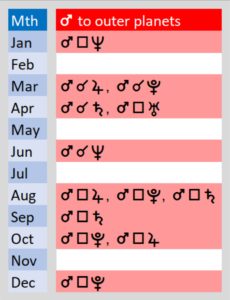 Mars has traditional associations with inflammation infection and disease.

The table of the right shows that there are 2 periods during 2020 when Mars is especially active: March – April, and August – October. These periods of Martian activity suggest trouble and heighened viral activity. Aggravation may also find expression in other ways, such as in financial markets and in violence or warfare. 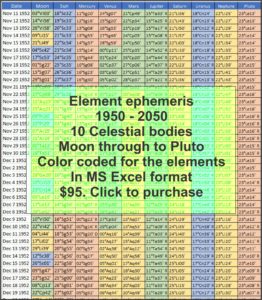 Consulting the Element Ephemeris above we see that between April and July 2020 Saturn moves into Aquarius, a sign it also rules. During April and May Mars is also in Aquarius. Because Aquarius is an air sign, associated with the generation of ideas, the internet is likely to become especially important at a time when many people are forced to stay at home because of enforced isolation. Mars gives activity and aggravation, and Saturn is powerful as the over-arching regulator. There is the danger that this regulation (Saturn) might become too repressive.

Then during most of 2021 Jupiter is in Aquarius, another sign ruled by restrictive Saturn. But, importantly, Jupiter is no longer in the sign of its fall. My guess is that travel and other restictions will be loosened, although still carefully regulated.

During 2021 both Jupiter and Saturn are in Aquarius, during which time I suspect the internet and online communities will assume unprecedented importance. This suggests we are at the dawning of a new era.

I would expect travel and associated restrictions to be lessened by 2021, and lifted by 2022 when Jupiter moves into its own sign of Pisces. This is the signal that the coronavirus has been tamed. If the connection made here between Jupiter in Capricorn and travel and other restrictions is incorrect, then this timing for the end of the coronavirus crisis will also be incorrect. As it stands I am expecting the crisis to wane beginning 2021 and to fade out in 2022.