A number of astrologers are suggesting that the coming conjunction of Jupiter with Pluto indicates that we will get a break from our present troubles, that there’ll be a repreive from our economic crisis and other woes. Good old jolly Jupiter will deliver!

There are 3 dates in 2020 when Jupiter conjoins Pluto: April 5, June 30 (when Jupiter is retrograde) and November 13. 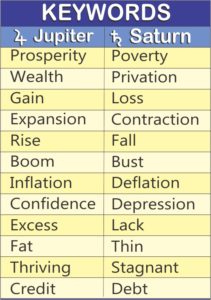 Yes Jupiter normally represents expansion, exaggeration, freedom. travel, sports, higher education, pushing the boundaries and jolly good times. But Jupiter in Capricorn is much less able to deleiver on these promises. He is in Saturn‘s territory, restricted by limitations of all kinds, including walls, barriers between people, self-isolation, quarantine, cancellation of sports events, travel and religious services; to name a few. Jupiter in Capricorn is said to be in his ‘fall’ for good reason. In Capricorn’s territory, high lofty and arrogent Jupiter comes crashing down to earth and is restricted to very mundane economic matters. He’s not his normal jolly self and is inclined to depression.

1. During the 2008 GFC Jupiter conjoined Pluto at the end of Sagittarius then both planets moved into Capricorn and the economic crisis was in full swing. 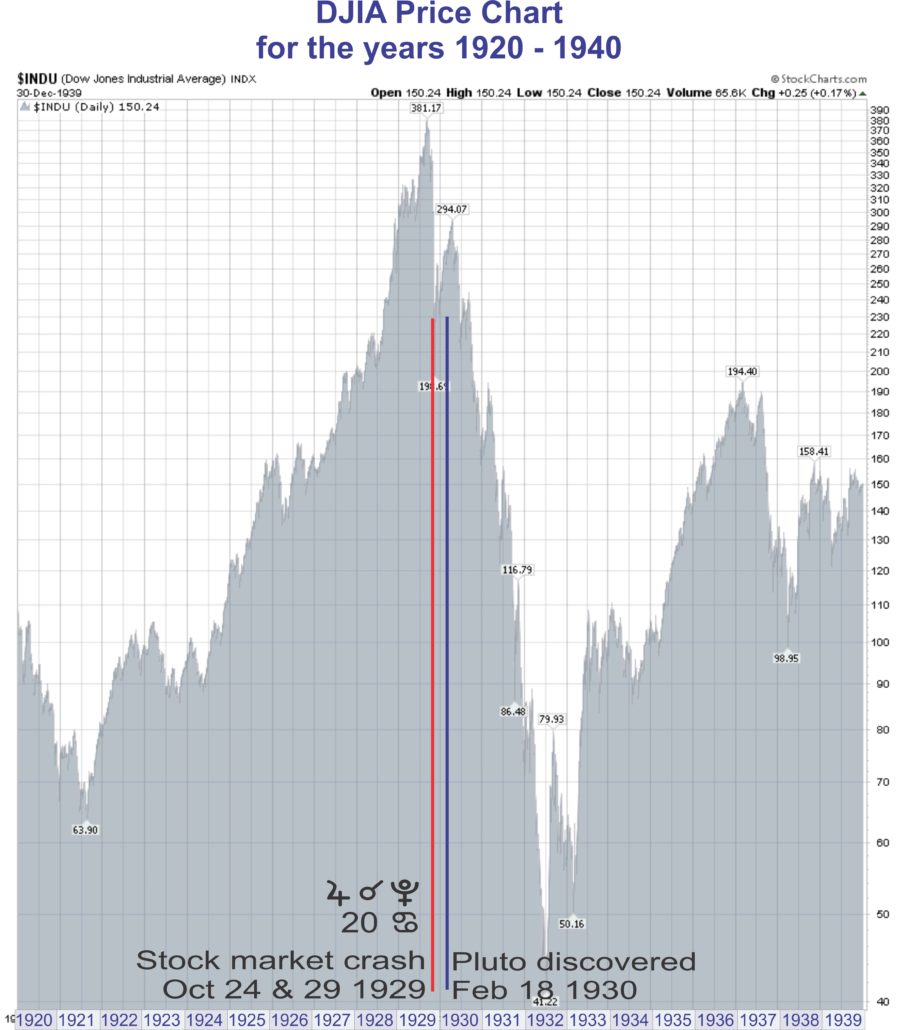 2. The great depression of 1929 correlated with a Jupiter Pluto conjunction at 20 degrees of Cancer, opposite Jupiter’s present position at 21 Capricorn. This was also the time of Pluto’s discovery.

3. Exactly one Saturn cycle ago in January 1991 we had the junk bond collapse with Saturn at 27-27 Capricorn, with Uranus and Neptune also in Capricorn. Jupiter was in a wide square with Pluto.

These are intended only as quick snapshots and my research has not included other dramatic falls over the last 150 years. However even this brief survey suggests economic crisis has a correlation with Jupiter-Pluto associations.

We hear the word ‘transformation’ blithely roll of many an astrologer’s tongue when asked what Pluto signifies. But don’t all the celestial bodies correlate with transformation in some way? The Sun obviously is the biggest contender as any planet coming close gets blinded and disappears from view, and is then reborn at its heliacal rising. The Moon correlates with transformative emotions; Mercury with new ideas, Venus with attraction; Mars with taking direct action, and so on….

Yes Pluto has a special intensity not shared by the other planets. Like a boy with a magnifying glass burning patterns into wood, he focuses the light of the Sun into the depths of the horoscope and dredges up what has been hidden, whether deliberately or unintentionally, for example the personal unconscious. Most often the result is crisis.

In mythology Pluto is also the god of the underworld and is associated with hidden wealth. In political terminology the word ‘plutocracy’ means rule by the weathy, which some say describes how many countries are governed today.

The planet of exaggeration and excess with a special focus on mundane economic matters meets the planet associated with exposing what has been hidden, with crisis. The obvious result is an economic crisis. Matters get exaggerated and exposed at a time (March-April 2020) when most of the superior planets are ruled by Saturn, the planet of serious consequences and restriction. While Jupiter normally represents prosperity, Saturn rules privation and depression. And it is Saturn who is in charge.

The obvious conclusion in relation to the coming 3 Jupiter-Pluto conjunctions discussed above is that the economic outlook for the remainder of 2020 is one of crisis. Not positive.

Last night when the Moon conjoined Jupiter there was a pause in the downhill slide, brief though it was, so perhaps there is some cause for hope. Maybe Jupiter in Capricorn is not as negative as I have described above. Maybe, but I wouldn’t hang my hat on it.

Personally I don’t tolerate big losses. I took my superannuation momey out of exposure to the share market months ago when I saw the present crisis looming. I hope you did the same. I won’t consider getting back into the market until the new year of 2021. That’s just a personal perspective and is not intended as financial advice in any sense.

Coronavirus and Astrology: Part 4: The end of the Virus Crisis Prince Charles Coronavirus