Who will win the Australian 2022 federal Election?

The method: The Aries Ingress of the Sun

The national Aries Ingress horoscope is set for the moment the Sun crosses the equator at the March equinox at the nation’s capital.  This is the zero Aries point. It has been used since antiquity to predict the outcome of national events such as elections.

The logic for using the Aries Ingress Chart is that the Sun represents power and glory. Nothing in the solar system comes anywhere near it in terms of power, luminosity, gravitational pull, magnetism and life-giving energy. It represents the king or person in power in whatever context of life is the subject of astrological study.

Here I am using the Aries Ingress horoscope as a stand-alone chart, without reference to the natal charts of the leaders of the Liberal or Labor parties. I use the shorthand 1H, 2H etc. to refer to the first house, the second house, etc..

Since examining the 2010 Australian Aries ingress chart which had Neptune on the Ascendant and the Moon conjunct Algol on the IC, which provided an accurate warning of the natural disasters for that astrological year, the evidence provided by the Australian ingress charts has proved to be a reliable indicator of events for the coming year. It will be interesting to see if that the current 2022 Aries Ingress horoscope for Australia is also a reliable indicator of events.

But first I would like to review the outcome of the 2013 Australian Federal Election as shown by the 2013 Aries Ingress chart. 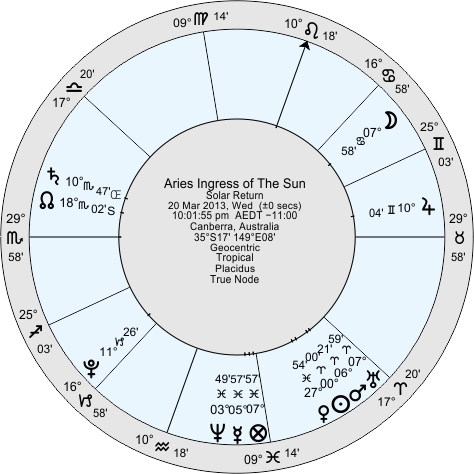 In  August 2013 I published my prediction, based on the Aries Ingress Chart for 20 March 2013, that the Liberals would win the Federal Election. Labor had been in power since Kevin Rudd won the 2004 election.

Below is an excerpt from this article:

“The government is represented by the 10th house ruler: the Sun in Aries in the 5th house. In the sign of its exaltation, it is powerful.

The Liberal opposition is represented by the 4H ruler: Saturn. Its peregrine and retrograde state indicates weakness. Its 12th house position indicates malicious gossip, underhand behind-the-scenes activity, and a general lack of visibility. Saturn’s square to the Midheaven axis suggests that the party is at odds with itself.

The evidence considered so far suggests that Labor is better placed to win the September election. However the Moon’s next aspect to a visible planet , which usually indicates the people’s choice, is the trine to Saturn, representing the Liberal opposition. The country goes to the Liberal-national coalition.” 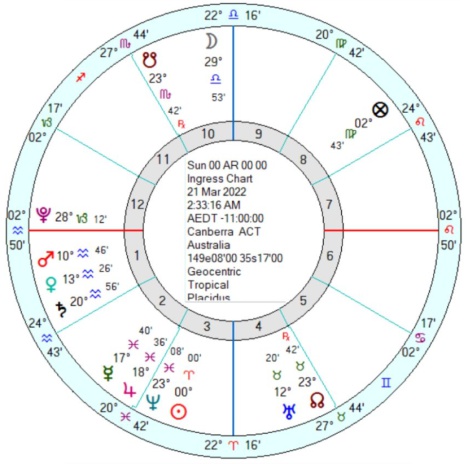 Above is the 2022 Aries Ingress horoscope for Australia.

The incumbent Liberal-National party coalition is represented by the 10H ruler Venus, and the opposition Labor party is represented by the 4H ruler Mars. Both planets are in the 1H and both are ruled by a powerful Saturn. Saturn as 1H ruler represents the country itself and as 2H ruler presides over finances. Clearly financial concerns are uppermost on people’s minds.

The big stand-out is the Moon, angular in the 10H at the end of Libra. The Moon in Libra is ruled by Venus. The Moon is on the cusp of ingressing into Scorpio where it will be ruled by Mars, the planet which represents the opposition. This is a powerful and obvious indicator that there will be a change of government.

Aside from the election the Moon’s square to 1H Mars from its detriment in Scorpio suggests physical problems associated with water. Mars in the 1H suggests problems with the land and the square from the Moon in detriment in a water sign suggests natural disasters such as flooding.

Since examining the 2010 Australian Aries ingress chart which had Neptune on the Ascendant and the Moon conjunct Algol on the IC, which provided an accurate warning of the natural disasters for that astrological year, the evidence provided by the Australian ingress charts, including the 2013 Aries Ingress chart, has proved to be a reliable indicator of events for the coming year.

It will be interesting to see if that the current 2022 Aries Ingress horoscope for Australia is a reliable indicator of which party claims victory in the 2022 Australian Federal Election.

As I interpret this 2022 Aries Ingress of the Sun horoscope for Australia  it looks like a Labor victory.