The various ephemerides and graphical depictions of celestial phenomena are offered free to the astrological community to use and distribute. My only request is that you credit the source. I have no commercial interest in publishing these graphics and only do so because I enjoy the publishing journey and the final result.

Each monthly calendar includes the element of each planet, lunar phases, retrograde planets and transits. 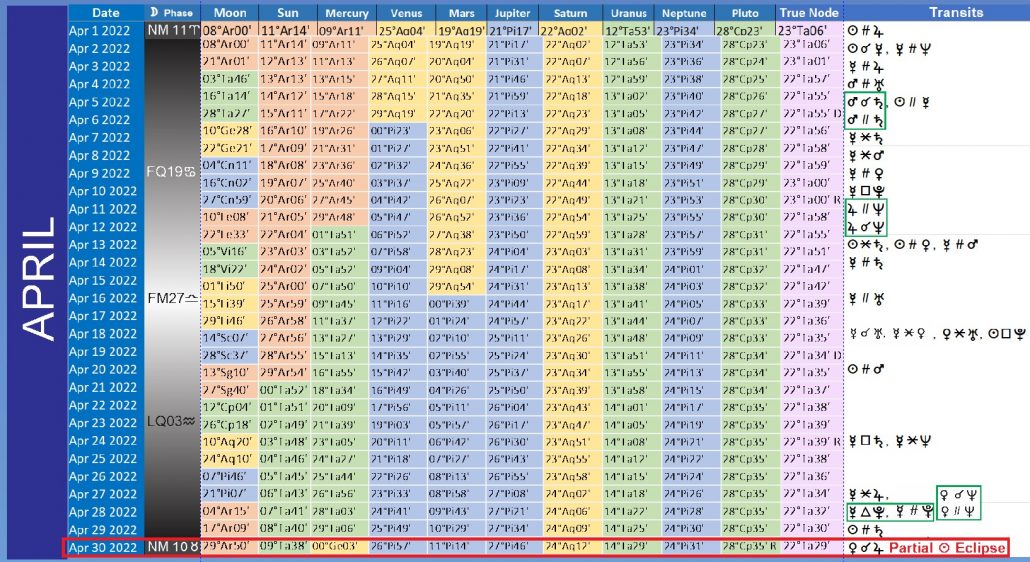 By the middle of the month we have 4 planets in water signs, and only one planet in an air sign: less objectivity, more emotion.

Other notable features are the Mars-Saturn conjunction in Aquarius on the 4-5 April and the Jupiter-Neptune conjunction in Pisces om 11-12 April. Both conjunctions are conjunct by longitude and they are parallel. It is like, from the earth’s perspective, Mars is eclipsing Saturn and Jupiter is eclipsing Neptune.

Mars is in the sign where Saturn is exalted and Saturn is powerful in the sign of his rulership in Aquarius. Mars will follow Saturn’s orders and squash dissent.

Jupiter’s action is to magnify and expand and his conjunction with Neptune suggests that we will fed more deception and lies. Many astrologers have reported this conjunction as a big positive but beware Neptune’s delusions. Jupiter Saturn aspects have often been associated with peace deals and treaties, which might be a very positive outcome, although the true nature of any deal is likely to be obscured.

The partial solar eclipse at the end of the month at 10 degrees of Taurus is not a good omen for leaders in entrenched conservative positions, particularly if their natal charts have significant points aspecting this degree.