The third important contributor to the meaning of the zodiac signs the planetary rulers.

Each zodiac sign is ruled by a specific planet. There is an ancient system of rulerships which, when followed, provides accurate answers to questions in horary astrology and in-depth interpretations in natal astrology. This system of planetary rulerships has an internal logic which dovetails with a number of basic astrological principles. It is important to have a thorough understanding of these principles before considering other astrological studies. 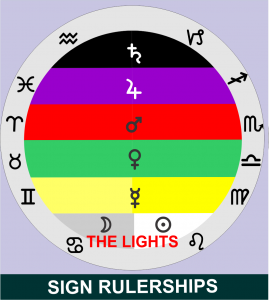 Together the 2 lights and the 5 visible planets rule the 12 zodiac signs.

The 2 lights rule one sign each, and the 5 visible planets rule 2 signs each.

The lights can be understood as a pair with the Sun ruling the day and the Moon ruling the night. 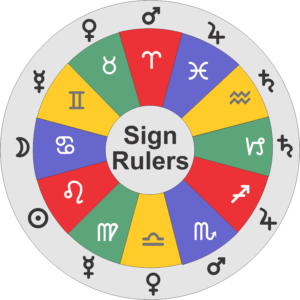 These  pairs are natural planetary opposites.
Mercury is the ruler of small things and details, and Jupiter rules big things and the broader perspective.
Venus is the planet of pleasure, pleasantness and fun; and of bringing people together in love and diplomacy; and Mars is the planet of divisiveness, the natural ruler of strife, warfare and divorce.

The lights represent everything that is ‘in the light’, with the Sun representing truth and clarity; and Saturn has sometimes been called ‘the prince of darkness’ and ‘the father of all lies’. The Sun represents light and life while Saturn represents death and desolation.

The Sun is the most physical representation of divinity and the only cosmic body with no shadow. Compare this with the Moon whose various phases are shown by varying degrees of shade. She drinks of the Sun’s  light until she is drunk with his love; and then empties out until she is completely dark at the new Moon, when she again yearns for his love. The Sun and Moon form a natural pair, archetypes of father and mother, male and female; and the Moon’s phases represent the stages of their relationship.

The system of planetary rulerships forms a set of interlocking principles that is both intricate and beautiful in its construction.