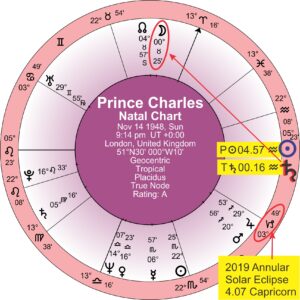 Yesterday’s announcement that Prince Charles has contracted the Coronavirus is reflected in his natal horoscope.

Saturn, the planet which is associated with isolation, quarantine, and gereral hard times, is making an exact square (90 degree aspect) with his natal Moon.

This is a very serious time for Charles. Saturn rules the 8th house of death and he will need to be very careful to follow medical advice.
The Moon in astrology represents one’s emotions, and significant women such as one’s mother, wife, and daughter, should they be alive. The Moon is also the natural significator of the physical body and the aspect from Saturn suggests an important test for Charles. Saturn conjoining the Descendant, which is one of the 4 power angles, highlights the importance of this time.

There is also a special focus on Charles’ Moon this year because it rules his profected 71st year, the 12th house.

The secondary progressed Sun is also adjacent the 7th house cusp and about to be impacted by Saturn. This reinforces the seriousness of his present situation.

It is interesting that the Boxing Day annular solar eclipse of 2019 is coincident with the cusp of his 6th house. The 6th is assocoated with illness. This solar eclipse I call the Coronavirus Eclipse because it coincided with the onset of the coronavirus and is very similar in appearence. 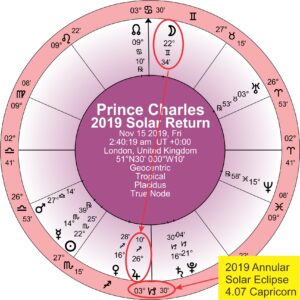 The 2019 solar return horoscope for Prince Charles has the degree of the 2019 Boxing Day “Corona virus eclipse” on the 4th house cusp. The 4th house cusp is associated with emational foundations and family ancestry. He is rocked to his foundations. The Moon, which rules his 10th house of public office, moves to oppose Jupiter, the planet that rules the 6th house of illness. His illness is a matter of public interest.

Mars squares Charles’ Moon at the end of March. Mars is associated with inflammation, infection, and general aggravation.
Saturn returns to square his Moon at the end of June and again at Christmas time. These are likely to be very difficult times for Charles should he survive the coronavirus.
At the beginning of January 2021 Jupiter and Saturn conjoin in the skies at the Great Conjunction at 0 degrees of Aquarius. Historically these Great Conjunctions, which occur approximately every 200 years, are associated with shifts in the established order and empires.

Some of the astrological indicators discussed here suggest that Charles’ illness and its repercussions might be more serious than is presently being portrayed. By the new year 2021 the world is entering a new era. To ascertain who will be king a further study of the charts of other contenders in line for the crown is required before any prediction can be made.