In my article on The Coronavirus and Astrology, Part 1 I described the uncanny resemblence of the 2019 Boxing Day  Annular Solar Eclipse with the corona virus. Both are surrounded by a corona. This eclipse took place as public awareness of the virus began to dominate the media.
In the Corona Virus and Astrology, Part 2 I described how Moslem pilgrimages to the holy cities in Iran were identified as potential agencies for the spread of the disease to neighbouring countries, and the correlation with the beginning point of the eclipse’s path of visibility. The eclipse path is shown above. There was a second eclipse on January 10 followed the next day by the Saturn-Pluto conjunction, whose synodic cycle is approx 35 years. Some astrology authors correlate the virus with this conjunction.
In Astrology and the Corona Virus Part 3: Saturn I identified Saturn as the common link between most horoscopes relevant to the corona virus.

At the full Moon of March 10 2020 there are media reports of a second crisis emerging in Saudi Arabia that has the potential to cause major disruption to the world markets. This event follows closely the devasting impact of the corona virus on the world economy.

The Crown Prince Mohammed bin Salman of Saudi Arabia launched tit-for tat price war with Russia over the price of oil, ordering steep price cuts and flooding the market, rocking a global economy already at risk of falling into recession as the corona virus transitions into a world wide pandemic. 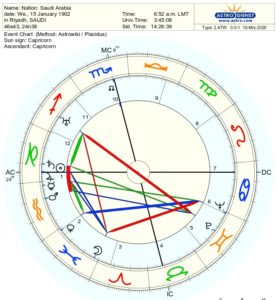 In hindsight it is easy to see the significance of  Saudi Arabia in this ongoing complex drama. Saudi Arabia is the exact beginning point of the eclipse which is very close to the Hormuz Strait, just to the north of which sits Iran.

In the horoscope on the left for Saudi Arabia, supplied by Astro-Deinst, we see a Capricorn ascendant with the Sun Saturn and Jupiter all on the ascendant. It reflects the reality of a kingdom marked by conservatism, hierarchy and repressive rule.

The March 10 full Moon at 19 Pisces sits close to the 27 Pisces Moon of the Saudi chart and links by sextile to its ruling planet Saturn. While there are various charts for Saudi Arabia, this chart, which shows a Saturn and Jupiter return with transiting Saturn also on the natal Sun, suggests that the kingdom is going through south node important historical turning point. Transiting Pluto also conjoins Sun Saturn and Jupiter as well as the ascendant. Pluto is associated with power plays, covert activities and crisis. Reports in the news media correlate well with what shows in this horoscope.

As financial markets look increasingly fragile with precipitous falls we find strong planetary correlations. The outlook is less than positive for the coming months. Jupiter is regarded in astrology as the planet of prosperity. In the sign of Capricorn it is said to be ‘in its fall’ and struggles to deliver on it’s promise of good times. During the GFC Jupiter was also in Capricorn. Jupiter will remain in Capricorn until mid 2020 when it moves into another Saturn ruled sign. However it is no longer in the sign of its fall.

At the moment we have the twin effects of the corona virus and the oil price war amplifying fear in the global markets.

Astrology and the Corona Virus Part 3: Saturn Coronavirus and Astrology: Part 4: The end of the Virus Crisis