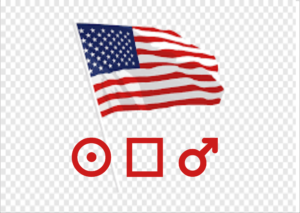 The current square aspect between the Sun and Mars goes a long way to describing the present inflamatory situation in the USA.

Of all the heavenly bodies in our solar system the Sun is the most potent by a very long way. Not only does it give us our light and life, which is not within tthe capacity of any of the other heavenly bodies, but it also underpins the foundations of astrology itself. Examples include the angles of the horoscope, and the fact that it gives the aspects their meaning, it gives us the dignities of the planets, controls the speed and the motions of the planets, and much more.

So when this immense and powerful body aspects (aligns with) Mars, in a stressful manner, we are very likely to witness events on earth which reflect this celestial event.

The Sun is the ultimate power source and has immense influence. Mars represents fire, aggravation, anger, battles and explosive destruction. When one body unites with the other and connects with the power points of a national horoscope we can expect to witness events which correspond to this alignment. Such is the case in the USA at the moment.

There can be little surprise then at the explosive anger that has been engulfing cities in the USA.

And yes there have been previous transits of the Sun to Mars which have not coincided with such outpourings of anger that we are currently witnessing. The difference is that they were not in such close alignment with with the Ascendant axis of the USA Sibly horoscope. And neither was the background context so conducive to the present expression of anger.

To analyse this further we can examine the transiting rulers of the Sun and Mars.  For example Mars is ruled by a fallen Jupiter in Capricorn, and in the Sibly chart Jupiter rules the Ascendant. Jupiter’s present condition (in its fall in Capricorn) represents the dire state of the nation. And there are currently many other transits in the process of applying and separating that add to the picture. But the basic aspects, in this case the alignment of the Sun with Mars, clearly describe current events. We don’t need to add other aspects or planets.

This is an example of minimalistic basic astrology. Sun square Mars. Yes there are many other aspects in play which add meaningful insights. But none so basic as the Sun square Mars. And there are supporters of other charts for the USA, each of which have their own merits. I do not mean to invalidate any of them.

The Sun is fundamental to understanding astrology and how the patterns of the heavenly bodies coincide with events on Earth. By following basic principles and adopting a minimalistic approach we can find deep insights.