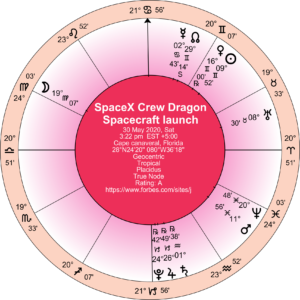 The launch of the SpaceX Crew Dragon has been hailed as” a thrilling new era of human spaceflight” between private enterprise, led by Elon Musk, and NASA.

It is intended that Crew Dragon will autonomously dock with the ISS spacestation.

From an astrological perspective there are several stand-outs in the horoscope for the launch.

First and most obvious is the close applying square aspect between the Gemini Sun and Mars in Pisces. We might assume that this aspect represent more than just the extraordinary fireworks which accompanied the launch.

The second stand-out is that the Sun is conjunct the fixed star Aldabaran, also known as The South Eye of the Bull.  It is associated with new beginnings, a new cycle. According to Oscar Hofman, Fixed Stars in the Chart,  Aldabaran has associations with high material honours, and the danger of losing them. This is a very powerful fixed star.

The third stand-out is the Virgo Moon‘s very close applying opposition to Neptune. The Virgo Moon emphasises the technical detail and expertise associated with the endeavour. Neptune is associated with glamour and deception, or at least something hidden from view. It also has associations with gas. It will be interesting to see how this plays out over the four month stay of the astronauts in the ISS spacestation.

The fourth stand-out is Jupiter-Pluto conjunct the IC. In the sign of Capricorn Jupiter is a malefic and its alignment with Pluto just either big success or terrible disaster.

Each of these stand-outs are very challenging and convey a sense of danger combined with the possibility of great success. We can only hope for the best.