Australia and the June 2020 Solstice Eclipse

Before I look at the June 21 2020 eclipse for Australia it is worthwhile checking the Aries Ingress Horoscope for Australia, set for the capital Canberra. 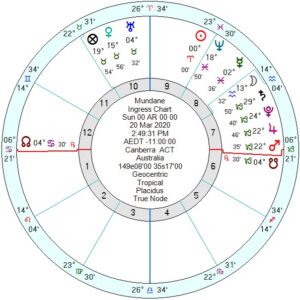 The Sun is placed in the ninth house of international relations and rules the second house of finances. When viewed against the background context of Australia’s position vis à vis the emerging tensions between USA and China, the Sun‘s ninth house focus makes sense.

The Moon represents the people and the general flow of events. It is positioned on the cusp of the eighth and squares Venus, the planet which rules the fourth house of mining and general produce, and also the eleventh house of allies. Australia is in a fix, caught between loyalty to old allies and the need to sell its iron ore and other goods to China. 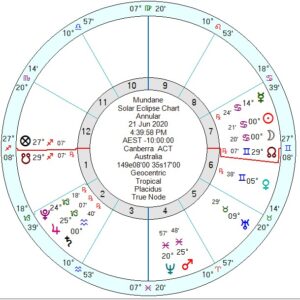 The June 21 2020 Annular Solar Eclipse horoscope for Australia falls in the  seventh house of trading partners and adversaries, repeating the general theme of the Aries Ingress Horoscope. Again we see Australia in a weak position, represented by the first house ruler Jupiter in the second house of finances in the sign of its fall and retrograde.

The eclipse Moon rules the eighth of death and loss and there is an obvious association with the Covid-19 pandemic and a possible second wave. It is the Moon which eclipses the Sun and therefore is very powerful. 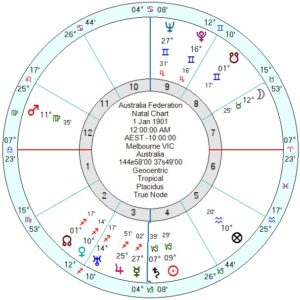 There are a number of horoscopes for Australia. The one I prefer is when the federation was officially celebrated on the 1st January 1901 at a banquet held at the Melbourne Exhibition Building at midnight.

The Midheaven for this horoscope is only 4 degrees off the eclipse point at 4 Cancer. This is only 2 degrees off the rising degree of the Aries Ingess horoscope and 4 degrees from the eclipse point at 0 Cancer. The Midheaven represents the government and its leader. An eclipse generally represents a crisis, or some unexpected event or revelation which brings a sudden change of focus.

The duration of this annular solar eclipse is comparatively long: about 6 hours. Some say that every hour equals one month in terms of associated events. However I think we can event to see correlations within a month of the eclipse. Already Australia’s Prime Minister, Scott Morrison, has been seeking new trading opportunities with India as a counter-balance with China.

Both the Aries Ingress Horoscope and the June 21 Annular Solar Eclipse horoscope indicate that Australia is going through very challenging times in regard to the need to balance our trading interests and our relationship with our allies. The eclipse suggests that the government will need to take decisive action to reserve Australia’s prosperity.

1 thought on “Australia and the June 2020 Solstice Eclipse”