Blog - Latest News
You are here: Home / The 2020 annular Solstice Eclipse and USA

In my January 26 2020 article The Coronavirus and Astrology, Part 1 I looked at the 2019 Boxing day eclipse and called it the Coronavirus Eclipse because its appearance echoes the coronavirus and it occurred just as the world was waking up to what was to become a pandemic.

On June 21 2020 we have another annular eclipse, this time opposite (within 3 degrees) the same place in the zodiac as the 2019 Boxing Day eclipse.

The 2019 eclipse was opposite USA Jupiter and Venus (Sibly chart). In the 2020 chart the eclipse is conjunct US Venus, ruler of the tenth house and within 4 degrees of Jupiter, the Ascendant ruler.

This eclipse begins in the Congo, passes through Yemen, Saudi Arabia, Pakistan , Northern India, China, directly through Tibet, Hong Kong and Taiwan, and is also visible in Wuhan and Beijing.

Eclipses are considered to be most potent in areas of visibility. The path of this annular eclipse is visible (cloud permitting) in a number of areas associated with conflict, crisis and tension, including Yemen, Kashmir, Tibet, Wuhan, Hong Kong and Taiwan.
Any one of these areas in the eclipse path have the potential to be flashpoints in regards to US foreign policy. Hong Kong and Taiwan are obvious candidates. 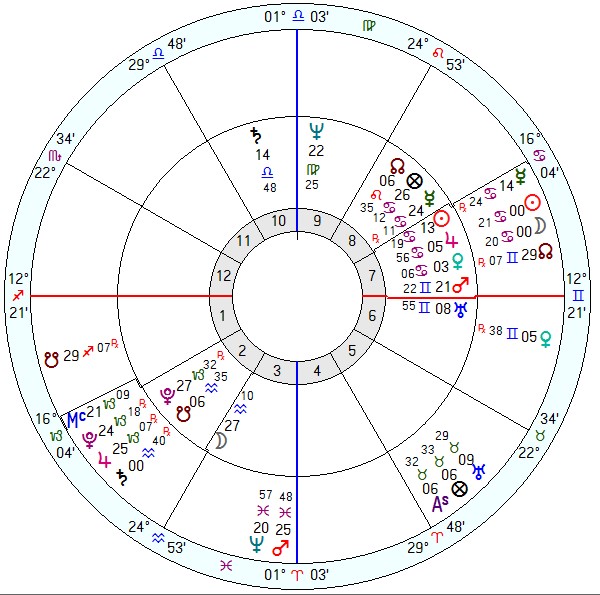 The eclipse of the Sun

In a very basic sense the Sun represents reason, clarity and truth; while the Moon represents the rise and fall of emotions. In mundane (political) horoscopes the Moon also represents the people.  A groundswell of pent-up feelings is likely to surface.

The bi-wheel shows the eclipse in the  seventh house of open enemies and trading partners.

The ruler of the seventh house is Mercury conjoining the Sun in the USA Sibly horoscope.  Issues concerning trading partners and opposing forces dominate thinking.

The Sun, which is being partially (mostly) eclipsed, rules the ninth house in the USA Sibly horoscope, suggesting a crisis in foreign policy.

The Moon, ruler of the eighth house, represents the resources of trading partners and open enemies,and eclipses the Sun, suggesting issues of supply, tariffs, and perhaps oil.

Looking at the eclipse on its own, set for Washington DC, we see Uranus on the Ascendant, pointing to protests, insurrection and rebellion.

With the Ascendant ruler Venus on the second house cusp of money and finances, wealth disparity is a driver for discontent. In Gemini Venus shows a split, a polarity which will need to be reconciled. Venus is stationing retrograde and we would expect matters to move forward as it begins to move to the US Descendant.

Jupiter and Pluto conjunct the Midheaven

Another stand-out in the eclipse horoscope is Jupiter- Pluto conjoining the Midheaven. These planets are conjunct by longitude and also in parallel aspect, and we would therefore expect that Jupiter is obscuring Pluto’s light, and is the dominant influence. Both are problematic for US leadership and administration. Pluto represents crisis and has the capacity to dredge up and exposé toxic material, while Jupiter in Capricorn is very depressive, especially in a financial sense.

The Sun in mundane astrology symbolises the nation’s leader and it is being eclipsed. Before we rush into dire predictions regarding Trump we must remember that this eclipse applies to leaders the world over and does not especially highlight Trump. Except of course that in the present context he is already under great pressure.

There is not the space here to do a thorough astrological analysis of Trump’s prospects. There is much to consider including his derived charts such as his solar return horoscope, his profected horoscope, his progressions, solar arcs and transits.

Issues concerning the US are very complex and a comprehensive astrological coverage is not possible in a single article. The Aries ingress horoscope, for example, should also be analysed. I leave that to other commentators.

I will next focus on issues associated with the eclipse for Australia.