Blog - Latest News
You are here: Home / When will the Coronavirus end?

Graphic 1 shows the daily number of reported cases of Covid-19 in Australia until late July, with an overlay showing the period during which Saturn was in Aquarius (using the tropical zodiac).

Graphic 2 relates to the US and is taken from covidtracking.com/data/charts/us-all-key-metrics which has accumulated data up to July 25, 2020.

Graphic 3 relates to world figues and is taken from nytimes.com/interactive/2020/world/coronavirus-maps.html 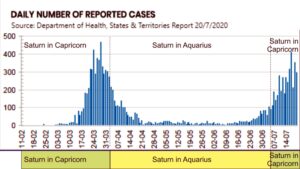 For each graphic the 3-month period during which Saturn was in Aquarius, using the tropical zodiac, is shown enclosed by the dotted vertical lines. The exact dates are March 23 until July 3, and for the purposes of this article are rounded out to the months April May and June 2020. 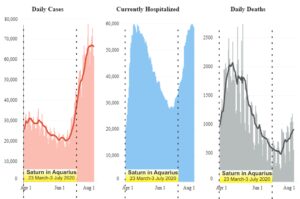 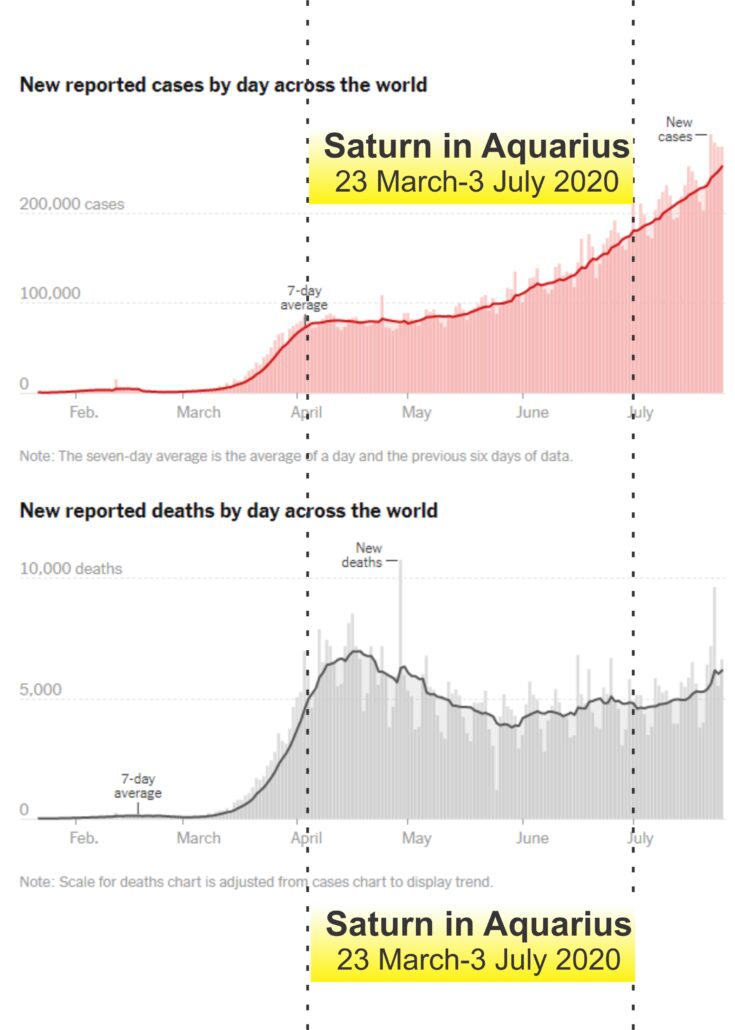 During the period during which Saturn was in Aquarius there is a correlation with the number of reported cases in Australia and the US, and the number of Currently Hospitalized in the US. This correlation is present but less convincing in the graph showing Daily Deaths in the US. Drilling down the data on the covidtracking.com/data/charts/ site shows variations for different regions in the US.

I should emphasise that statistics are always tricky and can easily be interpreted according to the author’s bias. However I am reasonably confident that this small amount of research provides some confirmation of the hypothesized correlation between the period during which Saturn was in Aquarius and a reduction in the incidence of coronavirus cases.

Since December 2019 Jupiter has been in Capricorn, the sign of its fall. In Capricorn the lofty ideals and expectations typically associated with Jupiter are parred right back to mundane economic and pragmatic considerations. Jupiter’s association with prosperity is reduced to economic malaise.
Also during 2020 Jupiter aligns with Pluto on 3 occasions. Previous alignments have correlated with stock market crashes and economic recession or depression. During 2020 economic difficulties, due to coronavirus restrictions, have made headlines around the world.

If this correlation with Saturn in Aquarius and a reduction of the coronavirus cases holds true in the future we would expect to see a noticeable drop in the incidence of reported coronavirus cases beginning in mid-December 2020 when Saturn moves back into the tropical zodiac sign of Aquarius; and hopefully the elimination of the virus in 2021.

In December 2020 Jupiter moves into Aquarius, away from the sign of its fall where it is associated with economic malaise. Although this might suggest some reason for optimism on the other side of the ledger Saturn makes a series of square aspects to Uranus in 2021. Square aspects are associated with tension and stress. Saturn represents the established system and Uranus is the planet of disruption, instability, and volatility. Major disruptions to established industry and revolutionary new developments are likely to bring a world of pain to some players and extraordinary opportunities to others. Space travel and associated industries are likely to play an important role, as the influence of automation and artificial intelligence.

The December conjunction of Jupiter and Saturn in Aquarius heralds a new era, and has previously been associated with important shifts in civilisations and the rise and fall of empires. The previous conjunction of Jupiter and Saturn in Aquarius, 615 years ago in 1405, coincided with the Ming government of China launching a serires of naval expeditions to establish a Chinese presence, impose imperial control over trade, and impress foreign peoples in the Indian Ocean basin. Again we are witnessing a rise in China’s ambitions. The early 1400’s also coincided with the beginning Europe’s great naval expeditions and the discoveries of the new world.

This brief article is only intended as an introduction to the hypothesis a of correlation between the reduced incidence of the coronavirus and Saturn’s stay in Aquarius. Other authors may develop the hypothesis further or even disprove it. As more accurate statistics come to light we will all be better informed.