Blog - Latest News
You are here: Home / The Sun commands the planets to station retrograde 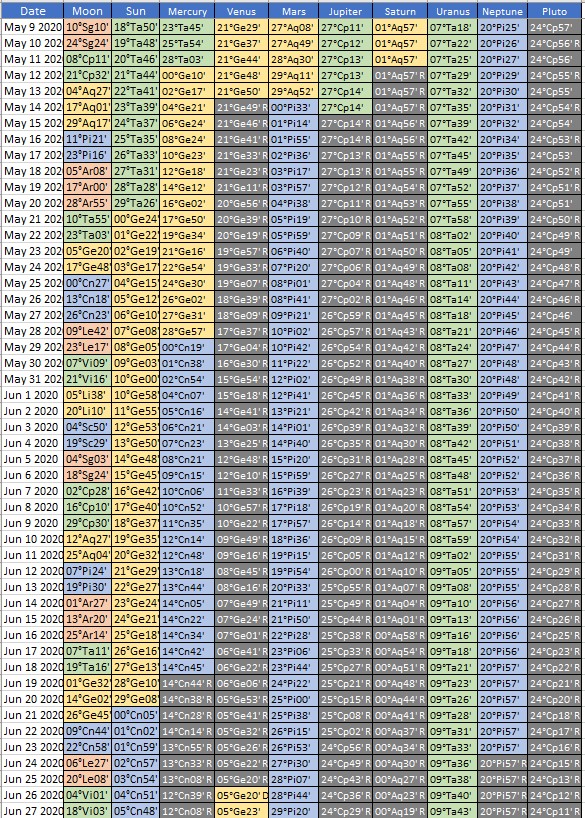 Following last week’s discussion of retrograde planets correlating with the winding back of coronavirus restrictions in various countries, the graphic on the left shows retrograde planets, in dark grey, for the remainder of May and for June 2020.

We see that as the Sun makes a dexter trine to the superior planets they station and turn retrograde. Like subjects being approached by the king, they must genuflect and step backwards.

Similarly Venus is slowing in anticipation of a meeting with the Sun which occurs around June 3, 2020. It appears to station and turn retrograde later this week. At the inferior conjunctions Mercury and Venus are always in apparent retrograde motion. Again the analogy with the king and his subjects seems apt.

Between June 24-25 2020 there are no less than 6 planets in retrograde motion, with Mercury and Neptune joining the retrograde march.

It is the Sun which determines the motions and stations of the planets. It is like the conductor and ‘commander-in-chief’ of our seasons and the movements of the celestial bodies.

Retrograde planets and the coronavirus Reverse the signs for the Southern Hemisphere?