The horoscope for the landing of InSight, shown on the left, is set for the coordinates the Vandenberg Aries Force Base, the place from which InSight was launched. Astrology, as it is presently practiced in the West is geocentric, and the launch location is the place of its last connection with the Earth. The coordinates for the landing location on Mars would make more sense, but these coordinates are not currently available. However it does not make sense to use the houses or the Part of Fortune which are referenced to the apparent path of the Sun around the earth, and they are not used here. 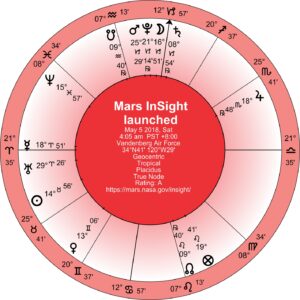 The second horoscope is for the launch of InSight, which is an acronym for Interior Exploration using Seismic Investigations, Geodesy and Heat Transport. As there is only approximately 8-9 months between the launch from Vandenberg Air Force Base and the landing on Mars there is little change in the positions of the outer planets; except that Jupiter has moved from Scorpio to Sagittarius. Mercury, the planet of flight, is on the ascendant.
It is interesting to compare these horoscopes with the horoscope of the launch and landing of the Curiosity Rover Mars probe, shown below.

The Curiosity Rover was launched on November 26 2011 as the Mars Scientific Laboratory at 10.02 EST from Cape Canaveral in Florida. The horoscope for this launch is shown on the left.

Notable features include the new Moon in Sagittarius with Mercury in Sagittarius turning retrograde. The Moon, which is always the significator of the action, applies to an exalted Saturn in the 9th house of far away places. Saturn rules the Ascendant and the Ascendant is conjunct the fixed star Vega which is associated with bringing knowledge down to earth.Mars-Curiosity-Landing.svg”>

In the horoscope for the Curiosity Landing horoscope the Sun aspects Mars.