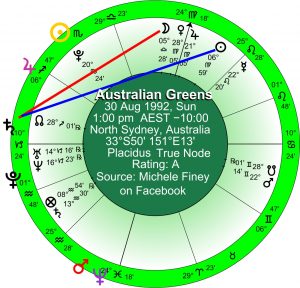 Once again the Australian Greens are in the news for all the wrong reasons in a public brawl, after NSW member Justin Field says fellow Greens MP Jenny Leong’s parliamentary speech was an ‘opportunistic’ attempt to force upper house MP Jeremy Buckingham out of the party.

The horoscope for the Australian Greens shows Saturn just separating from a square to the Moon, an aspect which is generally seen as being very negative. Saturn is also trining the Sun in this horoscope. The Sun is the natural representative of leaders, who in this case is the federal leader, Richard Di Natale. In the Guardian newspaper article (see link above) Richard Di Natale is said to have backed the call for Buckingham’s resignation.

Mars will oppose the Sun in late November and we can expect Richard Di Natale to be in fighting mode at that time.

In late December 2018 Saturn will cross the ascendant of the Australian Greens horoscope. This crossing of the ascendant is likely to coincide with a difficult time for the Greens, of unloading old baggage, and redefinition of their public persona. Saturn transits to the ascendant occur approximately every 29 years.

The transiting Sun also crosses the ascendant at the end of December 2018 bringing public attention to the Greens.
One interesting feature of this horoscope is Venus and Jupiter bracketing the Midheaven, the point in the horoscope which represents public image.

Both planets are in Virgo where each is disadvantaged. Jupiter, the planet of the big perspective gets very distracted by small details when in Mercury‘s domain and can lose its way. Venus, the planet of pleasure and romantic togetherness, does not operate well in the sign of pure logic and reason. While these planets are often referred to as ‘the two benefics’, they are much less benefical in the Mercury‘s sign; with the result that the greens public image can appear tarnished.