Blog - Latest News
You are here: Home / Horoscope for those born under the Southern Skies 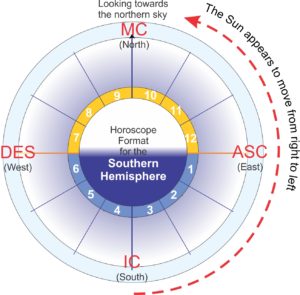 Following from this discussion I suggested on my Facebook page that it does make sense to change the horoscope format so that charts drawn up for the SH accurately reflect what we actually see when we look to the heavens. I recall it being a real head-twister as a student trying to understand why east is placed on the left in the standard horoscope format when actually east is on our right in the SH. How better it would be if what we see in the horoscope is the same as what we see in the heavens! Why present an arcane format to the aspiring student that does not conform with the viewer’s reality ?

Right to left following the Sun

In this revised format for the SH the Midheaven is still at the top of the chart and the IC at the bottom. The major adjustment from standard horoscopes is that the Ascendant is on the right because this is where the Sun rises. The Sun appears to move from right to left in the SH and this is reflected in this SH horoscope format. From the Ascendant the Sun moves leftwards up to the Midheaven and then down to the Descedant left in the Western hemisphere which is now on the left.

The houses are numbered in a clockwise direction, reflecting the order in which planets rise above the Ascendant. Their meanings are exactly the same as before. The 5th and 9th houses are trine the Ascendant and the other house relationships remain the same. The Descendant is placed where the Sun sets as it heads into the underworld; and the IC is at the nadir of the horoscope.

I understand that this format might take some getting used to by those of us who have spent years using the standard format. But how much better would it for beginning students in the SH if the horoscope accurately reflects our view of the heavens?

The horoscope on the right corresponds to the viewer’s perspective and ‘makes sense’ in real terms.

The Zodiac in the Southern Hemisphere SpaceX Crew Dragon Launch