The greens get the blues

I previously wrote about the Australian Greens party on 25 September 2013: Prediction: Greens and Pluto where I discussed Pluto’s transit across the ascendant of the Greens horoscope. This coincided in crisis, the resignation of inspirational leader Bob Brown, and the failure of the new leader Christine Milne to inspire. 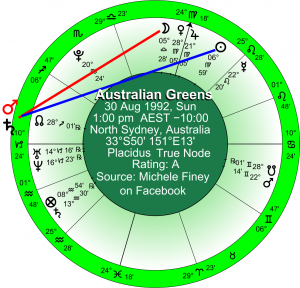 On July 2 2017 I wrote about the Greens in conflict, involving the transits of the malefics, Mars and Saturn, to the Greens horoscope.

And again we are witnessing turmoil within the Australian Greens party with the same malefics closing in on the ascendant, squaring the natal Moon, and trining the Sun.

Dr Richard Di Natale, the new leader of the Greens, is calling for a purge following their unexpected loss in the by-election in Batman in Melbourne Victoria, amid reports of damaging leaks against Alex Blathal. The Australian Newspaper, citing a copy of the complaint on Thursday, reports the issues ranged from intimidation and bullying through to comments about Greens members.

Saturn is associated with tough times, sometimes defeat, and often with minimising and consolidation. Natal Saturn is in its domicile in Aquarius so hopefully they will ease through this difficult period with some grace.

Jupiter cross natal Pluto, the planet associated with hidden motives in January, and returns to this position in April and September. Natal Pluto is in square aspect to natal Mercury, the planet of communication, suggesting that the Greens will struggle to eliminate secret communications and agendas.

A quick look at their secondary progressed horoscope shows that their progressed ascendant ingresses into Aquarius in August 2018. The progressed ascendant changing sign is generally associated with important and significant change. Fortunately as mentioned above, the ascendant ruler Saturn is in the sign of its rulership in Aquarius.

By this year’s end natal Venus will have progressed in Scorpio, again suggesting change. Venus rules the eleventh house of allies and also the deputy leader.