To view a brief introduction to Aries Ingress horoscopes and their meaning click here. 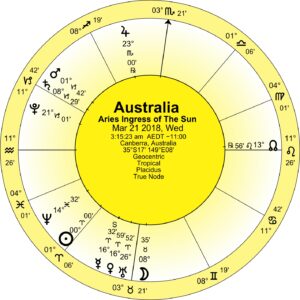 In the Aries ingress horoscope for Australia the Sun, which is the focus of the chart, is positioned within a degree of the cusp of the third house, and therefore can be considered a third house planet. The third house is associated with communications and transport, and includes the internet and social media.

Irrespective of which country you are living the Sun will be in tight square to Mars, the planet of war and contention. In Capricorn Mars is exalted and therefore powerful, and has strong potential for both war and productive activity.

In Australia’s chart Mars, as tenth house ruler, represents the government. The Sun is the natural representative of kings and leaders, and its square to Mars shows that the Prime Minister, who at the time of writing is Malcolm Turnbull, is having to work hard to achieve his goals. Mars also rules the third house and suggests communication issues.

The houses which represent the government and the opposition both benefit by the presence of benefics. The tenth house includes Jupiter, although it is retrograde. The fourth house includes an exalted Moon. However the ruler of the tenth house is Mars in its exaltation, and the ruler of the fourth house is Venus in the sign of its detriment. On balance the government is much stronger and more likely to win an election.

The people are represented by the ruler of the first house which is Saturn. Saturn is very strong in Capricorn, but its close proximity to the twelfth house cusp suggests a feeling of being trapped, of being disadvantaged. The Moon in close trine to Saturn, separating by only six minutes, reinforces this sense of popular disenchantment. 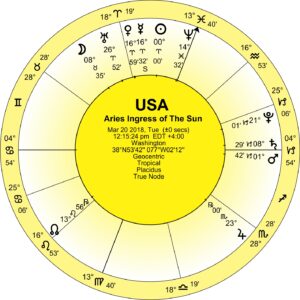 In the USA ingress horoscope Neptune has exceptional importance as it sits exactly on the Midheaven, the most public place in the horoscope which also represents the seat of government. Neptune is the planet of deception, confusion, intrigue, and sinister dealings. Confusion and suspicion reign.

The two malefics, Mars and Saturn, sit astride the descendant. The seventh house represents open enemies, those with whom there is contention as well as those in partnership. Both Mars and Saturn are powerful in their respective signs of exaltation and rulership. There are  powerful forces aligned against the US.

The Moon is the natural representative of the common people and also rules the first house. It is separating from a close trine with Saturn, to form a wide opposition to Jupiter. As tenth house ruler Jupiter represents the government in this horoscope, and its retrograde status shows a government attempting to regain control. However Jupiter is also a benefic, even if retrograde. The people, shown by the Moon in the eleventh house, are hopeful. The Moon also represents the second house of income, and in Taurus the Moon is exalted, favoring prosperity.

These comments are only intended as brief introductions to Aries ingress charts.