Blog - Latest News
You are here: Home / Fear Death and the Coronavirus

We live at a time when the masses are trapped in a public fear. The sword of death hangs over us should we forsake the safety of our own home and chat with our neighbor. Some people are very anxious. Reports of the number who have died from the coronavirus are published daily. Quarantines, self-isolation, and restriction are the order of the day. All the fun stuff like sports, going to the local café, cinemas, and much more is prohibited.

If we believe the basic assumption of astrology, that what is in the heavens is reflected on earth and visa versa, then we would expect to see this grim situation reflected in the sky. 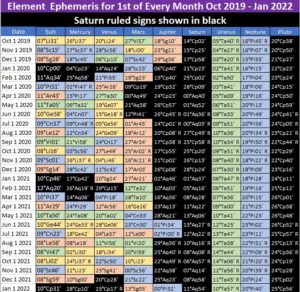 The planet of fear and death

We would expect the planet that is associated with fear and death to dominate. That planet is Saturn and it is in its own sign, the place where it is very powerful, in Aquarius. It has recently been in the other sign where it is also at home: Capricorn. Any planet in one of these two signs is ruled by Saturn. Fear and death prevail.

Currently Mars Jupiter and Pluto are in Capricorn and will all move into Aquarius over the next couple of years. Of these Mars is the quickest and leaves Saturn’s signs before the other planets. Its nature is to aggravate, infect and inflame and it will continue to do so from July through to the end of 2020. See the adjacent diagram. Towards the end of each year and the start of the next the Sun, with his two attendants Mercury and Venus, are also in Capricorn and Aquarius adding more weight to serious situation.

Planet of darkness and death

Saturn rules the signs opposite Leo and Cancer, which are ruled by the lights: the Sun and Moon. In astrology light is symbolic of life. Saturn represents darkness, heaviness, seriousness and responsibility. Death, the plague, cemeteries, confinement and incarceration are part of its dominion. Basically, everything we consider ‘bad’.

The grim situation we are experiencing here on earth is clearly being reflected in the heavens. The heavens indicate that it will last, albeit with ups and downs, until the new year of 2021 at least.

Prince Charles Coronavirus The lady who was never going to die