The Chinese property giant Evergrande has a huge debt load and is teetering on the brink of collapse threatening to become the largest debt default by a company in Asia. Such a collapse could jolt investor confidence across markets globally. Beijing seems reluctant to bail out the company but is taking steps to limit the damage.

Evergrande was listed on the Hong Kong exchange on November 5, 2009, according to Yahoo Finance.

Clearly Evergrande is in huge trouble and there’s little credit for making dire astrological predictions about its future.

However, it is interesting to examine the IPO horoscope and look at the schedule of transits for November 2021. 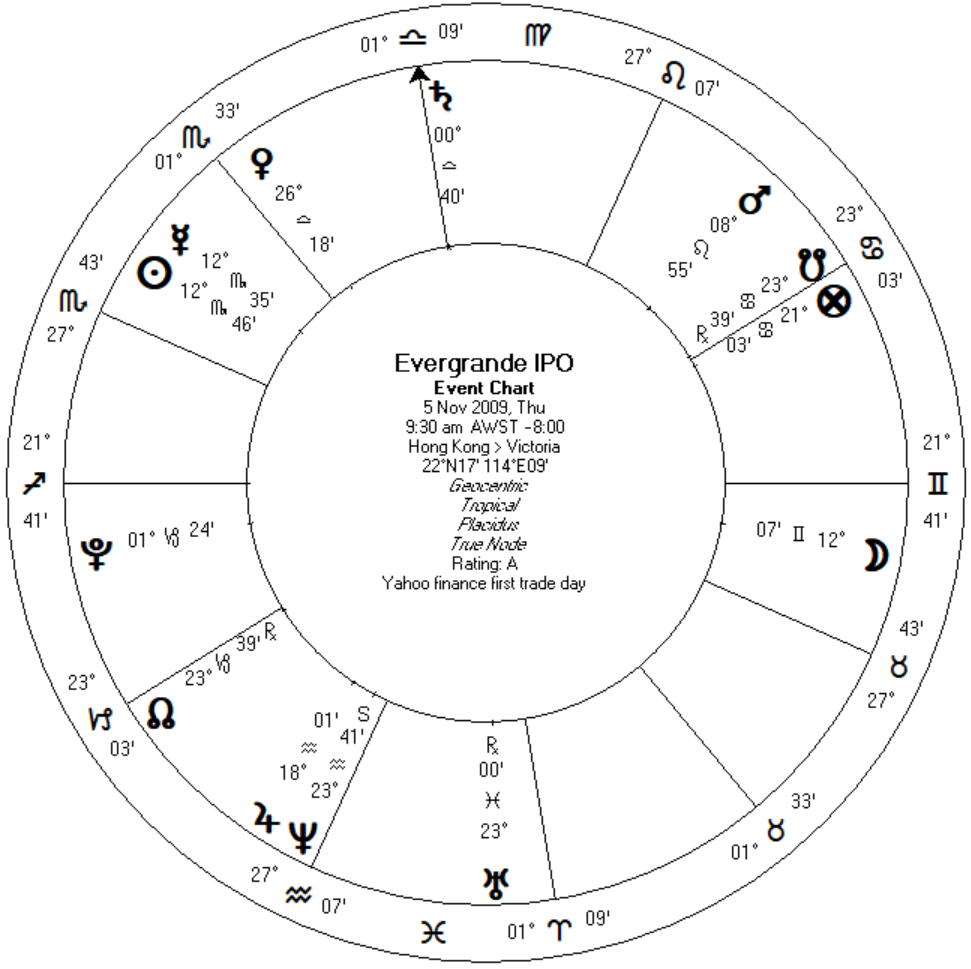 The standout planet in the horoscope is Saturn sitting on the Midheaven. Saturn is exalted in Libra and rules the 2nd house of finance and the 3rd house of communications. Until recent times the company has done exceptionally well from a financial perspective, driven by a successful sales approach. Exaltation also carries a sense of exaggeration and now we find that its assets are overvalued, and its prospects were over-hyped. Saturn makes a close square with Pluto in the 1st house, emphasising the company’s power and behind-the-scenes management.

Jupiter rules the 1st house and therefore represents the company, and is disposited by a high-flying Saturn (an oxymoron!).

Some important transit dates for November 2021.

The new Moon, often called ‘the dark Moon’,  on November 4 on the company’s Sun suggests dark forces operating behind the scenes. New Moons are associated with new beginnings or the ‘planting of new seeds’.

The following day, the transiting Sun conjoins the company’s Sun in what’s called a ‘solar return’, the birthday for the listed company.

And the same day transiting Uranus opposes the company’s sun. This happens approx. every 84 years. On this occasion there is a cycle of 3 hits due to Uranus’ retrograde and direct motion, in July and November 2021, an May 2022.

Uranus is associated with breakups, sudden changes, shock and surprise, and we can expect something similar to manifest to Evergrande during this Uranus opposition to the Sun cycle.

Mars and the lunar eclipse 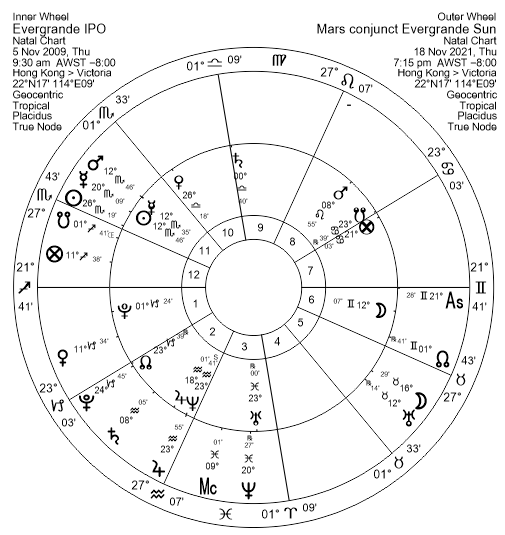 But the lunar eclipse across the axis normally associated with incarceration and ill-health is much less positive. At its maximum this lunar eclipse is visible just below the horizon in Hong Kong, the location of the exchange where the company is listed.

In late November and into December Saturn aspects first natal Mars then the natal Sun. Saturn is also known as ‘the grim reaper’ and perhaps will reap his harvest at this time. 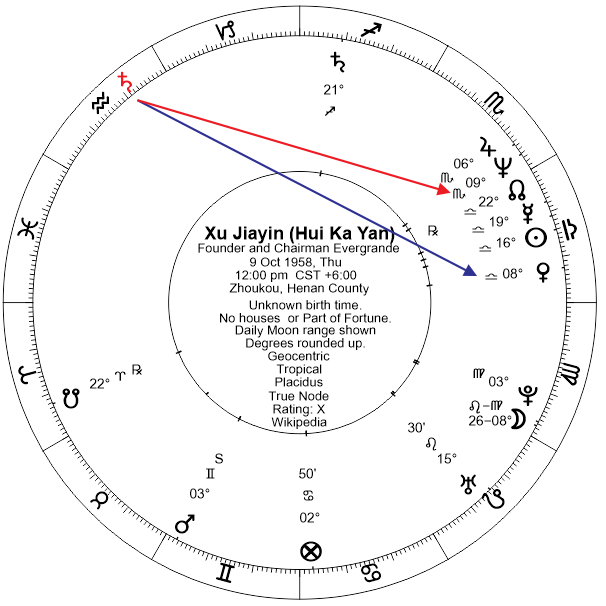 The birth time for Evergrande’s founder, Xu Jiayin, is unknown. Consequently, no houses are shown in this horoscope, the Part of Fortune has been deleted, and the Moon’s position is shown for its range of movement through Leo and Virgo.

Transiting Saturn is aspecting Jupiter Neptune and Venus. Saturn is associated with challenging times, debt failure and destruction. Xu Jiayin is not in a good position atm.