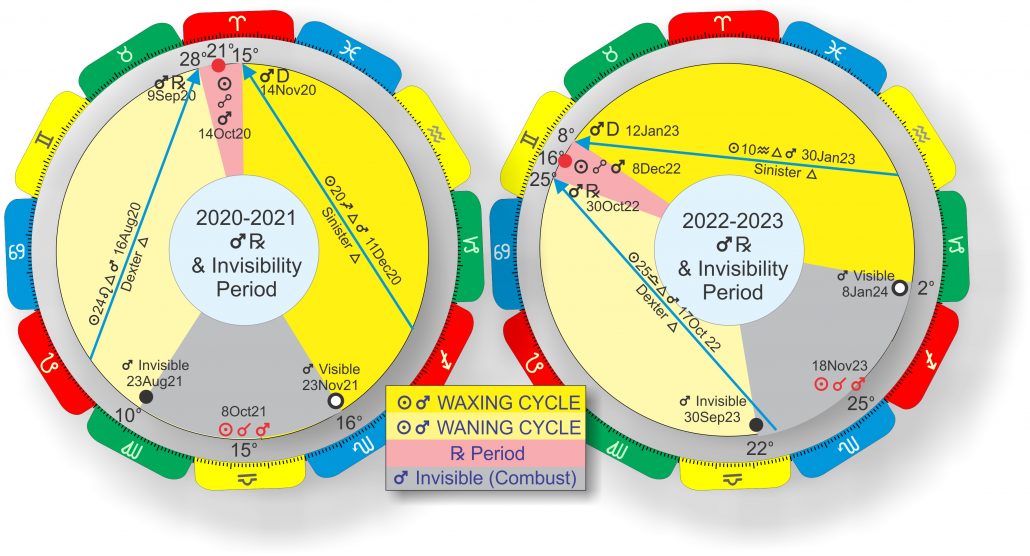 During the solar conjunctions Mars is always invisible. The Sun is much too bright for Mars to be seen. The diagram shows Mars’ present and next period of invisibility (when it is combust).

The Sun as transformer

When the Sun conjoins Mars it invigorates it. It is as though Mars first dies to our vision, is then seeded by the sun, and is reborn when it again becomes visible. The Sun is the great transformer. No other body can ‘hold a candle’ to its extraordinary creative and transformative power. This cycle of death and rebirth is repeated approx every 25 months, usually in the next sign, occasionally skipping signs.

It is important to note that the apparent speed of the Sun as it appears to orbit the earth is twice the speed of Mars. The Sun moves about 1° each day and Mars averages about ½° each day. Mars’ speed varies because of its elliptical orbit and during its retrograde or direct stations.

Because of the Sun’s brilliance Mars is always invisible during the solar conjunction. It becomes invisible to our eyes when the Sun approaches within 15°, and after the conjunction it becomes visible when the Sun has separated than 15° from Mars. It will be next visible in late November 2021 when it is Scorpio.

The attached diagram also shows the Mars last and next retrograde periods. I have discussed in previous posts how the retrograde periods of the superior planets are triggered by trines from the Sun. First the dexter trine forces Mars to retrograde, then the sinister trine gives Mars permission to move forward in direct motion. It is the Sun which controls what happens.

The signs in which Mars are retrograde are generally opposite those where it is invisible.

The conjunction of the Sun with Mars occurs shortly after the new Moon in Libra and within weeks of other planets turning direct. And Venus moves out of Scorpio where it is exile into Sagittarius. Put together these various planetary events suggest that October-November 2021 is an important turning point.