I have been reminded by Mary Trevenar Rowe that Banaby Joyce is currently in the midst of Uranus transits. Great call and one that few seasoned astrologers would miss. She correctly points out that the last transit of Uranus conjunct Joyce‘s Sun is on March 3rd 2018. 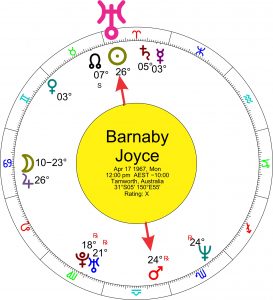 Uranus is the planet of disruption, sudden shocks and surprises, rarely pleasant. Its function is to break down barriers, to liberate and awaken. it is best used sparingly but when it makes an exact conjunction to a natal planet, which happens approx. every 84 years, it cannot be ignored.

And when the planet Uranus is conjoining is the natal sun, which reflects personal identity and sense of purpose, it is especially significant.

Barnaby Joyce‘s natal Sun is Aries 26 Aries. Uranus is currently at 25.45 Aries, and as Mary Trevenar Rowe says, the aspect is exact on March 3rd 2018.

Uranus has been opposing his natal Mars and conjunct his natal Sun over the last 12 months, and the conjunction to his natal Sun is the last pass before Uranus finally ingresses into Taurus.

Conjunctions of Uranus to the natal Sun are associated with major change, upheaval, sudden and unexpected happenings which can be particularly uncomfortable (at least in the short term), and being pushed into the public light for all the wrong reasons.

The solar eclipses of August 21 2017 and February 2018 both made very close aspects the his natal Sun. The first was a trine which correlated with his dual citizenship status, The second was associated with his marriage breakup and affair with a staffer.

And now, a week prior to the Uranus conjunction to his natal Sun, there is a challenge to his leadership. Again it really doesn’t look good for Barnaby Joyce. Even if he survives the leadership challenge the transits from Saturn square its natal placement continue until the end of 2018. As I mentioned in a previous post this Saturn transit is associated with a test, issues of maturity, sometimes defeat, and questions of responsibility.