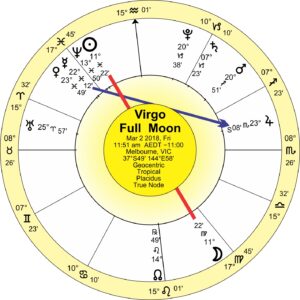 The full Moon occurs when the Moon is drunk with the Sun‘s light, and at its brightest. From this point onward it is on the wane and reaches the point of full darkness in 2 weeks on March 17 at 26 Pisces.

The Moon is translating the light of Saturn in Capricorn to the Sun. Saturn is the last planet the Moon aspected before its opposition to the Sun, and so channels the facts associated with harsh reality to our rulers. What our leaders do with this information is suggested by Neptune: hide the facts and distort the picture of reality. It is fashionable to glamorize the attributes associated with Neptune, and emphasize its supposed associations with art and creativity. However Neptune is primarily associated with distortion, deception and confusion.

The trine between Mercury and Jupiter is important because it is applying. Less important is the trine between Venus and Jupiter because it is separating. Mercury is received by Jupiter and therefore given a welcome, therefore raising our hopes. Also worth noting is that Jupiter itself is stationing and about to turn retrograde. As a slow moving planet it stays near this point for a couple of weeks.

Depending on your location a more precise interpretation can be obtained by including the meanings of the houses ruled by the planets mentioned above. I have not including house rulerships as they differ according to location.

It’s interesting that there are five planets between 20-23 degrees at the moment. If you have significant planets or points at these degrees in your natal chart you are likely to be going through some ‘interesting’ and busy times.