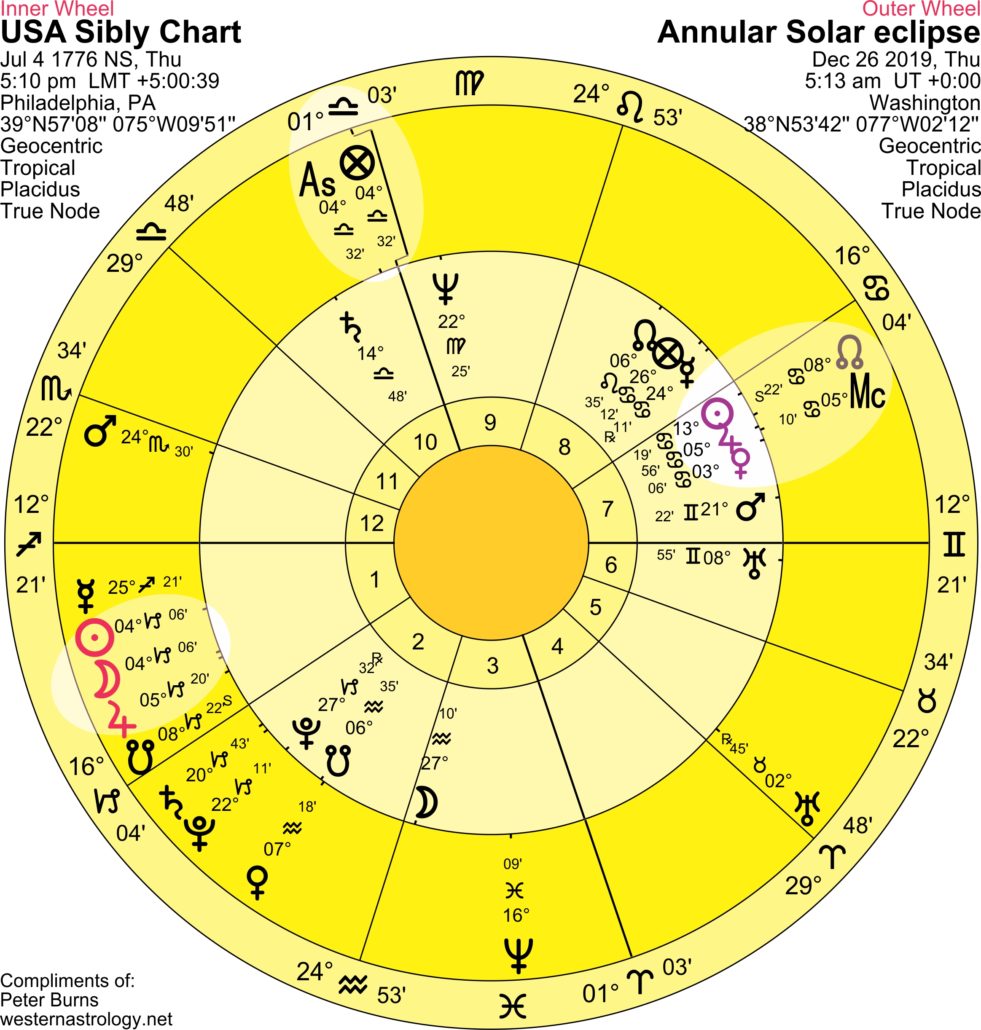 The annular solar eclipse is shown here for the USA’s  capital Washington DC. In a mundane (political) horoscope the Sun represents the nation’s ruler. When the Sun is eclipsed the ruler is generally eclipsed in some way. Previously I have said on Facebook that although Trump is likely to be impeached he is very likely to survive.

The image of the annular eclipse with the Sun’s light shining around the edges reflects this reality in that although Trump has now been impeached his light continues to shine. He is ‘alive’ in a political sense.

When the eclipse horoscope is superimposed over the Sibly chart for the USA (accepted by many as the national horoscope for the USA) we see the lights and Jupiter in the eclipse chart all opposing the Venus Jupiter Sun conjunction in the USA chart. Venus as ruler of the Midheaven represents the President and conjoins an exlated Jupiter.

The eclipse also squares the Midheaven of the USA chart and the ascendant of the solar eclipse chart is conjunct the Midheaven of the US chart. There are many important connections here between these charts suggesting that this eclipse represents a significant moment for the US and, as a result, for the rest of the world.

In the US horoscope the eclipsed Sun is ruled by Saturn, ruler of the second house of finances. This suggests economic crisis, at least for the US.  This warning is amplified by Jupiter in the sign of its fall in Capricorn, accompanying the solar eclipse.

The actual path of the eclipse stretches from the Arabian peninsula, through southern India, across Indonesia, and finishes in the islands above new Guinea. The majority of its path covers the Muslim world and it is here that we can expect developments. Eclipses are often associated with unexpected diasters, includung earthquakes and tsunamies, and have also been linked to surprising, sometimes shocking, political events.

Technically this lunation is only an eclipse for those locations which are in the path of the eclipse, and consequently some may not see this as an eclipse with relevance to the US.