The Lunar Eclipse and Nic Natanui 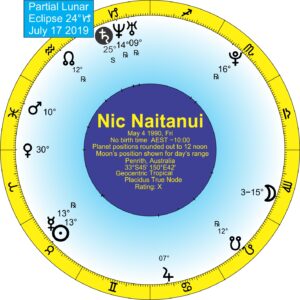 Since ancient times eclipses have been associated with events that are life changing and/or disruptive.

The effect of an eclipse is to block light from one of the luminaries: the Sun or the Moon.

A solar eclipse occurs at a new or dark Moon when the Moon crosses between the Earth and the Sun, blocking the Sun‘s light from reaching some parts of the earth.

A lunar eclipse occurs at a full Moon when it enters the Earth’s shadow,  and falls into darkness. At this time the Earth sits between the Sun and the Moon, blocking the Sun’s light from reaching the Moon.

Both solar and lunar eclipses are associated with sudden abrupt changes that may involve a disconnect with the familiar, forcing us to realign our priorities.

How they effect one’s life depends on the unique alignment of the lights and planets in one’s natal horoscope.

Eclipses impact people from all walks of life and no-one is exempt. In the news in Australia is Nic Natanui, an AFL football star of prodigious talent, ruckman for the 2018 premiers, the West Coast Eagles. He has only recently returned to play after a year off recovering from a knee injury. Now he has suddenly been sidelined with an angle injury. It must be very disappointing for him.

In hi natal chart Nic Natanui has Saturn the 25 degrees of Capricorn, just one degree from the lunar eclipse point at 24 degrees of Capricorn. Saturn in Capricorn gives toughness and control. In Capricorn Saturn is said to be dignified. However from the Earth’s perspective it appears to be stationing before going backwards in retrograde motion. This retrograde station reduces it’s strength which may contribute to issues with the bones and knees.

Nic Natanui’s natal chart is shown above. Because his birth time is unknown neither houses or Fortuna are shown. The Moon’s degrees are the daily range. The planetary aspects in his horoscope show a lot of promise, including the Sun-Pluto opposition, and the Mars – Jupiter trine. Unfortunately Nic Naitanui is going through tough times.