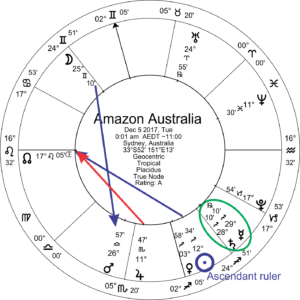 I have just seen the news that Amazon finally went live, after some incorrect news about its opening, just after midnight Tuesday December 5th.

The chart for this event is set for its Sydney headquarters. The “just after midnight” time is set for one minute after midnight. However it could conceivably be as much as 15 minutes later depending on one’s interpretation of the phrase.

I have highlighted a number of features in the chart which is shown on the left. These are the ones that first drew my attention: the ascendant ruler, the Moon and its next aspect, and aspects made to the ascendant.

The ascendant ruler aspecting the ascendant is generally considered to be a positive indicator. The Moon linking the eleventh house and the second house in its application to Mars, ruler of the third house, is interesting. It’s too late at night here to attempt an interpretation.

Amazon Australia’s customers are represented by seventh house ruler Saturn. Mercury, ruler of the tenth and eleventh house’s, is about to conjoin Saturn.

Mercury, as tenth house ruler, represents the company’s products. Because it’s in detriment and retrograde its prices are low. Low priced products come to the people.