As Mars enters Scorpio expect more action. The ingress of Mars into Scorpio from Libra represents an important shift.

The essential dignities indicate that in Libra Mars is hobbled by diplomacy. Its natural urge to take the offensive and express aggressive is restricted in the Venus ruled sign of Libra.

Venus is about enjoying the pleasures of life, being nice and diplomatic with each other, forming bonds and alliances. Venus is often associated with young women, beauty and having fun. Mars in his natural state will have none of this. He wants to get out of there, get rugged and mix it up with his enemies.

As Mars enters Scorpio he leaves Venus’ bed and goes to work. In the sign of Scorpio he is very comfortable plotting revenge and working behind the scenes to destroy his enemies. In Aries we see Mars in open attack. In Scorpio he works ‘behind the enemy lines’, undermining and sabotaging. Aries is his ‘day’ sign and Scorpio is his ‘night’ sign.

Where there has been hedging and indecision expect action. We may not hear of it immediately but black ops have more scope for action. In charts of countries or leaders that resonate with Mars in Scorpio expect action. 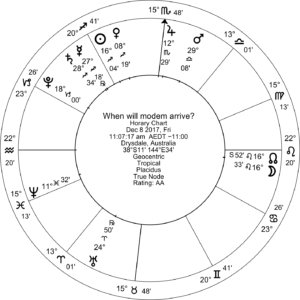 In horary astrology the ingress of Mars into one of the signs he rules is seen as a very big deal. Moving out of detriment into rulership is a big step up. Whatever Mars represents in the horoscope goes from weakness to power and strength.

In the adjacent chart the question was twofold:

2. When will the modem arrive?

The background story is that we were switching internet providers and the new provider had switched off access to the internet before they had delivered the modem. We needed the new modem to regain internet access and it was five days overdue.

The third house rules messages, the internet, email and associated equipment. Here it is ruled by Mars at the end of Libra and about to enter Scorpio. In Libra Mars is very weak, reflected by the fact that we had no internet. However Mars is about to enter Scorpio, one of the signs it rules.

So the answer to the first question is yes: internet access will be restored and it will work very well.