Blog - Latest News
You are here: Home / Who will be President after the 2020 election?

Notice the title doesn’t include any suggestion that the election must be fair or without interference. The only criteria is the result. 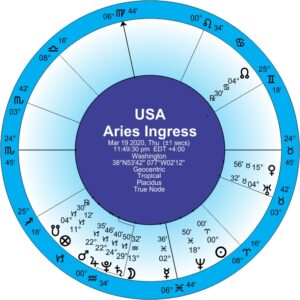 I use the Aries Ingress chart before the election. This is the moment when the Sun, on its northward journey, crosses the equator at the vernal Equinox. Aries Ingress charts have been used for hundreds of years to predict the fortunes of nations and city states.

The country as a whole is represented by the first house and its ruler. Unless it represents one of the aforementioned houses, the Moon represents the mood of the public and its next applying aspect is often a pointer to the outcome of the election.

Planets in any of these houses are also included in this assessment. A primary consideration for all planets is their condition in terms of essential and accidental dignity, and their relationship with other planets, which includes their receptions and aspects. 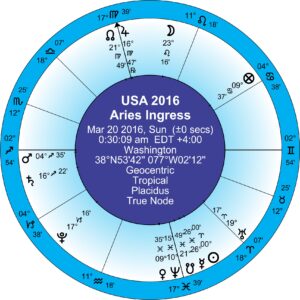 In the 2020 chart Mercury has just gone into direct motion and is moving about half its normal speed, suggesting proggress is slow. Mercury‘s next aspect is to Uranus which shows unpredictability.

The government’s assets are shown by the ruler of the eleventh house: Venus. Venus is powerful in Taurus and has moderate accidental strength in the derived ninth house.

The Democrats are ruled by Jupiter in its detriment in Capricorn, a sign where Jupiter’s lofty ideals are debased to financial and political realities. Jupiter is applying to a conjunction with Pluto, suggesting crisis. Mars is making a exact conjunction with Jupiter, pushing on with pragmatic practicalities and maybe frustration. However Mars represents the Democrat’s supporters suggesting a strong push. Jupiter is beseiged between two malefics, Mars and Pluto.

One plus for the Democrats is that Mars, which represents its supporters and assets, is very strong in Capricorn.

The mood of the people is represented by the Moon in Aquarius. The Moon is governed by a powerful Saturn, on the cusp of entering Aquarius, where it is no longer in the sign of the Moon‘s detriment. The Moon‘s next aspect is a square to a strong Venus in Taurus, which represents the gov’t’s supporters. Perhaps public sentiment shifts to the Republicans.

It is interesting that Mars Jupiter and Saturn all oppose Trump’s Saturn Venus conjunction, and also trine his Midheaven. I am not offering a full analysis of Trump’s chart here and my intention is to use the Aries Ingress chart as a stand-alone assessment.

On balance this interpretation of the Aries Ingress chart suggests that the Republications will retain office with Trump as president.