Vladimir Putin, Russia and the Eclipses of Oct-Nov 2022

In 5 days Putin is turning 70. Astrologers use the birthday chart, set for the moment when the Sun returns to the exact same position it at birth, to interpret events for the following year. It’s called the ‘Solar Return (SR) chart’ – hence the saying ‘many happy returns’, although that sentiment may not be universally shared in Putin’s case. 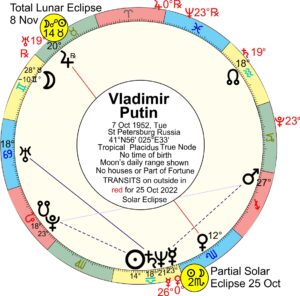 However, because Putin’s birth time is not known we cannot do a SR chart. Transiting planets can be plotted around his natal chart in which time sensitive elements, such as the Moon’s exact position, the houses and the Part of Fortune, have been deleted. In the adjacent chart the Moon’s position is shown by its range over a 24-hour period.

Some astrologers will protest and say that there is a popular ‘rectified chart’ in circulation with 3° Scorpio on the Ascendant.  A rectified chart is one where the birth time has been deduced from correlating important life events with planet positions. While these charts are popular, I don’t trust them. Astro.com lists several alternate birth times, including one from Marc Penfield with 27° Capricorn rising, very close to Pluto’s present position.

It is significant that the path of the eclipse passes just above Russia. The present context of the Ukraine gives this eclipse special importance.

Will Putin be sidelined? If we are to believe Western media reports, which have obviously been heavily ‘massaged’, Putin is already under great pressure. Transiting Pluto is in exact square with Putin’s natal Mercury, suggesting that he is under great pressure, a mental crisis. 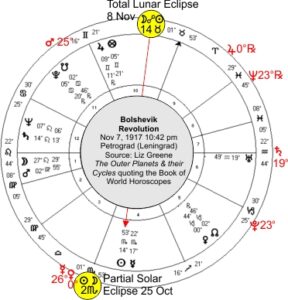 Moving from Putin’s horoscope to the original birth chart for the USSR which is set for the Bolshevik Revolution, we see a powerful correlation with the October and November eclipses of 2022. This chart was used by Liz Greene in “The Outer Planets, The Astrology of the Collective”, pages 119-124, published in 1983, to predict the downfall of Soviet Russia in 1989. This was an astonishing prediction made at a time when Russia and its leadership were apparently stable and securely ensconced in a position of power; with nothing in the media to suggest any internal turmoil.

Although there are other charts relating to more recent transitions of the Russian Federation, I believe this foundation chart is still valid and I use it for Russia itself.

The IC (4th house cusp) is at 2° Scorpio, aligning with the October 25 partial solar eclipse. The IC represents the foundations of Soviet Russia; and the solar eclipse on the IC suggests a sudden change at the heart of Russia.

Two weeks later is the lunar eclipse at 14° Taurus on November 8, directly opposes the Sun.  The Sun represents Russia’s leadership and also rules the Ascendant in this horoscope. The Ascendant represents the country and its people. If this horoscope is still valid, it looks like there are very significant changes in store for Russia and its leadership in the coming months.