The first chart below for the lunar eclipse is set for Canberra, Australia’s capital. 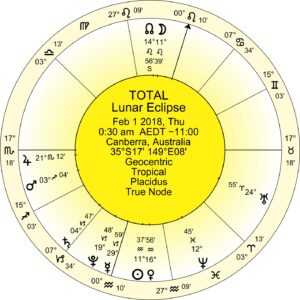 Following are the adjusted Ascendant and Midheaven positions for those living in other Australian capital cities are shown below.

Below is the Lunar Eclipse chart set against the Australian 2017 Ingress chart. Notice that the ascendants of both chart are conjunct. 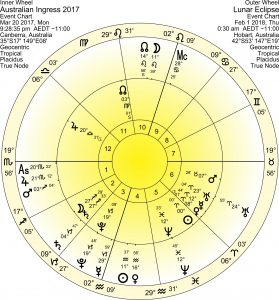 The ingress of the Sun into Aries has for many centuries been used to predict political fortunes of the country and associated matters.

The first house of the ingress chart represents the people and in tlunar eclipse chart we see that Jupiter, ruler of the second house of finances, has moved to prominence conjunct the ascendant. Money and resources are uppermost in the public mind.

Mars rules the ascendant and Jupiter and makes a trine aspect to the Midheaven: our political leaders are on notice. This is emphasised by the eclipsed Moon in the tenth house. Somebody at the top is eclipsed. with the Moon ruling the ninth house of international relations and matters concerning the higher principles of integrity and ethics we can expect some interesting developments.