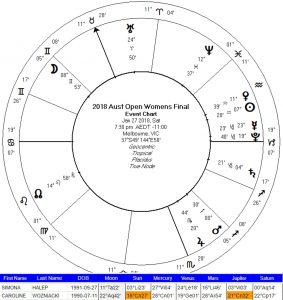 The odds at a number of betting agencies had Woziacki at around $2.20 to win and Haleep around $1.60.

Below is the horoscope for the beginning of the final plus the planet positions for the 2 contestants. Their time of birth is unknown.

The Moon in Gemini was also making a trine by sign to her Aquarian Moon.

Natally Wozniacki has her Sun conjunct Jupiter with Jupiter is exalted in Cancer which is one important indicator of success.

Halep had no Jupiter aspects and her Moon in Taurus received no assistance from the transiting Moon in Gemini.

Those who saw this in advance would have more than doubled their money.