Again I am experimenting with new ways of presenting a horoscope which presents information more clearly. 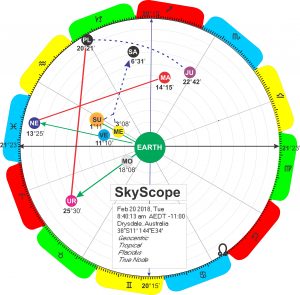 In the standard representation the planets are all arranged along the same circle. This gives little indication of distance between them, which can be a difficult concept for a beginner. Presenting a Accurately representing a 3-D spatial arrangement on a flat piece of paper or screen is challenging. Cartographers have been wrestling with the issue of converting 3-D to 2-D for centuries.

Yesterday’s attempt I called a GeoScope. On reflection I think SkyScope is a more accurate name as it’s a view of the sky as seen from earth.

The planets are shown in their respective orbits which is intended to create a sense of relative distance from earth, although obviously not to scale.

I think the concept of aspects between planets becomes clearer when the planets are placed in an orbital framework with some sense of distance between them.

In this SkyScope conjunctions are shown by a green line. Applying aspects are identified by an arrow.

Feedback or suggestions on how to improve are welcome.