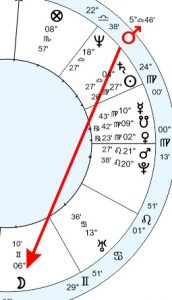 Astrology can reveal relationship events in unusual ways. This morning my partner Alison caught her little finger in the orange juice squeezer. There was blood and pain. Fortunately nothing serious.

Although I was in the house I wasn’t there when it happened. This is a very important point because in my horoscope (see attached partial image) Mars was applying to trine my Moon in 25′ of arc.. A very close applying aspect. But the injury didn’t happen to me and I played no part in the unfortunate accident.

One important interpretation for the Moon in a man’s chart is that it represents his female partner (wife, girlfriend…..). Other interpretations would include the man’s mother, his emotions and automatic responses, and the meaning of the house in rules.

In case you are new to astrology Mars represents cuts, injuries, upsets, fights, violence, things splitting apart (and therefore divorce and separation), blood outside the body…

What I have found over the years is that when a transiting planet aspects my Moon something happens in Alison’s life that resonates with this transit. It has happened a lot and we have often remarked on it. Alison is also an astrologer so she understands. And, before you ask, there were no transits this morning to her chart that suggested an accident or injury or a Mars type expression.

I have only found mention of this phenomenon in a couple of astrology books. I can’t recall anything in the traditional works.

But seriously does this happen? How does the cosmos know that she is my partner and direct the planetary energy towards her? Using palmistry and astrology I have consulted over 18,000 people in the last 30 years, mainly horary astrology in recent times, and I am rarely surprised as I understand that astrology describes the fabric of our lives with uncanny accuracy. But nevertheless when something like this happens I am still impressed.

Over the years I have heard my theories about why astrology works and I have my own theory but the truth is that no-one really knows. Not really. But the word ‘awesome’ in the sense of its original meaning, is the one that I would use to describe astrology.