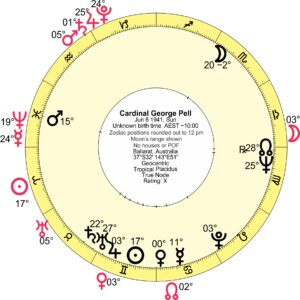 No houses or POF are shown and zodiacal longitude is rounded out to to 12 noon.

Transiting planets are shown on the outside rim for 12 noon April 7th 2020, which was the approximate time of his acquital and release.

Transiting Pluto and Jupiter as well as Mercury all aspect his natal Saturn Uranus conjunction.