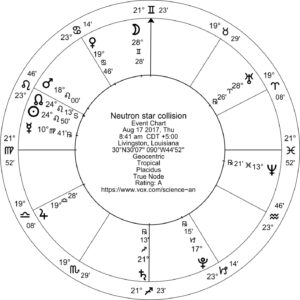 In news media around the world today momentous gravitational wave discovery has been reported,  which is likely to have enormous repercussions for science over the coming decades.

On August 17 09:41 UTC, a collision between two neutron stars, which had been orbiting each other as a binary pair, was observed by the LIGO-Virgo detectors. 1.7 seconds later, a burst of gamma-rays hit the Earth, instantly confirming that merging neutron stars were responsible for the so-called short-duration gamma-ray bursts, solving a 50 year-old mystery. The simultaneous detection of gravitational waves and the reception of light from the collision demonstrates that gravitational waves travel at the speed of light. The discovery also has big implication for our understanding of the role playing by black holes.

LIGO stands for the twin Laser Interferometer Gravitational-wave Observatory detectors, located in Livingston, Louisiana, and Hanford, Washington, USA. Both measured ripples in the fabric of space-time – gravitational waves – arriving at the Earth from a cataclysmic collision in the distant universe.

The horoscope for this gravitational wave discovery is set for the primary location of observation: Livingston in Louisiana, for the local daylight time of 8.41 am. Telescopes from all around the world, including Australia, cooperated in the discovery. Some news reports quote 9.51 UTC, which is 10 mins difference, for the time of the collision. I will change the time used for this chart if this later time is confirmed.

What stands out with this chart is that the Sun and Mercury are the only planets in the signs they rule. The Sun is the primary representation of light in astrology and also exerts the most gravitational pull of the cosmic bodies used in astrology. 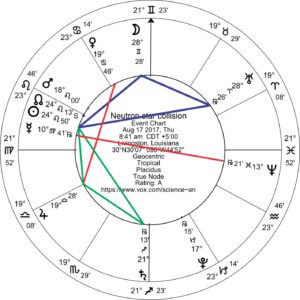 Mercury, the planet of reasoning, has long been associated with science. It is questionable whether it’s retrograde motion can be considered as a negative here as the observation of this spectacular collision was recording a past event.

Saturn has also been associated with science, in terms of scientific principles and tests. Here it is very angular on the IC.

The collision occurred between a pair of binary stars, and the 10th house angular Moon is in the double-bodied sign of Gemini.

Aspects relationships are also interesting (see the diagram below). The Sun, which is the primary representation of light, is linked to two aspectal formations. The first involves a trine to Uranus, the planet associated with sudden surprises and breakthroughs, and a sextile with the Moon, the body associated with the reflection of light. This formation is shown in blue.

The Sun also links by trine to Saturn and sextile to Jupiter (shown in green). It is interesting that the creation of gold and other rare metals by the collision of the has been mentioned in a number of media reports. Gold is related to the Sun in astrology and the Sun in this horoscope is in the sign of its rulership and link two important aspect patterns.

The announcement of this gravitational wave discovery on October 17 occurs within a few weeks prior to the last trine aspect between Saturn and Uranus which perfects on 11 November.

Also in this horoscope we see the benefics Venus and Jupiter in mutual reception by square, and Mercury opposing Neptune.

An understanding of receptions is important in the interpretation of these various aspect patterns, although I have not had the time to detail these relationships here. These comments are only early observations and not intended to be comprehensive.