In a recent Facebook discussion a number of people reacted to my assertion that the 12 letter alphabet of astrology ignores basic principles and creates unnecessary confusion.
This article is published in response to requests to explain this point of view.

My understanding is that Zipporah Dobyns first introduced this the term “The 12-letter alphabet” in the 1970’s. This system has also been called the “ABC system of astrology”. 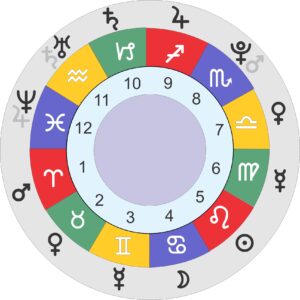 In the 12 letter alphabet system the houses are said to correspond with the signs and their planetary rulers. For example, the 1st house (A) is linked to the sign Aries (B) and to the sign’s ruling planet Mars (C). Together the house sign and planet combination is often referred to as “an archetype”.

In the adjacent diagram is shown the general layout preferred by those who use the 12-letter alphabet.
The 12 houses in the centre are aligned with the 12 signs in the central wheel and with the planetary rulers on the outside. I have greyed out the traditional rulers of the signs to highlight the general preference of those who use the outer planets as rulers of Scorpio, Aquarius and Pisces.

The combination of house, sign, and planet is sometimes referred to as an archetype. For example the first archetype is said to comprise the first house which is linked to Aries and its planetary ruler Mars. The second archetype links the second house to Taurus and its ruler Venus. This system of archetypes follows the circle of houses around the horoscope in an anti-clockwise manner.
Dictionary.com defines an archetype as

Objections raised in the defence of the 12-letter alphabet

A. There are 12 houses and 12 signs.
This is too much of a coincidence.

B. There are groups of signs planets and houses which are similar and called ‘archetypes‘.

I will comment on each of these archetypes in Part B.
Here I will describe some important differences between the signs and the houses.

Differences between the signs and the houses

The celestial and terrestrial worlds are fundamentally different and cannot be interchanged.

The 12 divisions of the ecliptic and the mundane spaces above and below the horizon cannot be mixed. 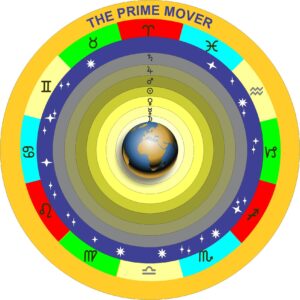 In the ancient cosmological system, the universe was comprised of two basic divisions:

1. The world of the divine glory and perfection, comprising the The Prime Mover and the Zodiac. The signs belong in this sphere of divine perfection.

2. The world of manifest material reality which is subject to birth decay and death. The houses, which reflect our lives on the earthly plane, belong to the material plane.

Equating the divine with the mundane shows confusion about the structure of our universe. 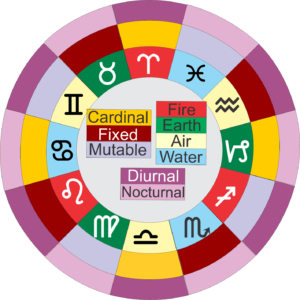 This last point often comes as a shock to astrologers who are accustomed to viewing the order of the houses from 1-12 in from the ascendant, down to the IC, then up to the Midheaven. 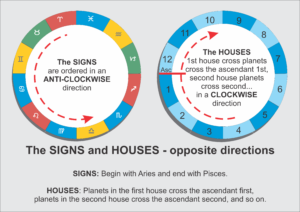 Response to the 1st objection

“There are 12 houses and 12 signs. This is too much of a coincidence.” 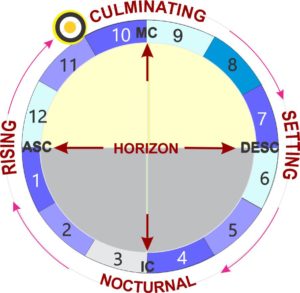 This objection is very superficial.
Above I have described above eight important differences between the signs and the houses which shows that interchanging the signs and houses does not make sense.
The signs are numbered in the opposite direction to the houses. That there are 12 signs and 12 houses does not imply that they are the same or that they can be interchanged.
The adjacent diagram shows the apparent path of the Sun as it moves through the houses. The Sun in the 3rd house moves into the 2nd house, and from the 2nd house moves (or succeeds) into the 1st house, and from there rises into the 12th house; and so on.
The same principle applies to the planets as they appear to move around the earth as it spins on its axis.
The meaning of the numbering of the houses relates to the order in which planets in the houses rise above the ascendant, with planets in the 1st house rising first, planets in the 2nd house rising next; and so on. House numbers are ordinal numbers; the relate to a sequence or series. They were not intended to show a natural flow or sequence in an anti-clockwise direction.

The association of the 12 houses with the 12 signs was a deliberate attempt to simplify astrology. This attempt has been attributed to Alan Leo in early 20th century England who was fighting a battle to avoid incarceration and sought to promote the idea that astrology was merely psychological.
While working with 12 simple principles that interchanges houses signs and planets may reduce the astrology teacher’s workload, it hinders rather than helps an understanding of astrology.

The mistake of extending the anatomical model

While it is true that there is an anatomical correlation between the signs and houses, with Aries and the 1st house both associated with the head; Taurus and the 2nd house associated with the throat and so on, it is a mistake to extrapolate this correlation to a psychological or other type of flow. There is no natural flow in a psychological sense from the 1st house through to the 12th house. While it is true that attempts have been made identify a sequential flow, it doesn’t make sense.

The fabric of house structure is constructed from different threads of meaning which bind them together, none of which has to do with a natural flow of the houses in an anti-clockwise direction. These threads include:

There is not the space here to describe how each of these threads contributes to the make-up of the houses.

The addition of the modern rulers, Uranus Neptune and Pluto, to the 12-letter alphabet has further distorted the meanings of the 8th 11th and 12th houses.

The primary meaning of the eighth house has to do with the resources and movable possessions of the partner, death fear and loss, and inheritance. Connecting the eighth house with Scorpio introduces the idea of sex and intimacy to the meaning of this house, qualities which in the very long history of astrology it did not possess. It is the fifth house which has long been associated with sex.

Using the modern planets as rulers of the Scorpio Aquarius and Pisces ignores some fundamental astrological principles, which are beyond the scope of this article to explore thoroughly.
Most astrologers I have met who use the modern rulers are unaware of the logic underpinning the ancient system of sign rulerships.

Consequently these same astrologers cannot explain what was so wrong with the original planetary rulers that they needed replacing. They don’t know what they don’t know. Did Mars stop being Mars? Is it true that the reason Mars rules Scorpio is no longer understood; forgotten? Perhaps it didn’t make sense that Mars would rule a water sign! Did Jupiter stop being Jupiter? These questions they seem unable to answer.

Go to Part B where I discuss the validity of the 8 ‘archetypes’ (combinations of sign-house-planet).

The Houses, Temples of the Sky, by Deborah Houlding. This is an excellent reference for understanding the houses.
On the Heavenly Spheres, A Treatise on Traditional Astrology by Helena Arelar and Luis Ribeiro. This comprehensive work is highly recommended for beginning and experienced astrologers.
Traditional Astrology for Today, An Introduction by Ben Dykes.
Scala Coeli, The Ladder of Heaven, A Collection of astrological Essays by Mari Garcia and Joy Usher.
The Horary Textbook and The Real Astrology by John Frawley.
Christian Astrology by William Lilly
Book of Astronomy (1 & 2) by Guido Bonatti translated by Ben Dykes
Other works by these authors.

My writings are informed by these and other authors such as Robert Zoller, Robert Hand and Joseph Crane. I do not mean to suggest that astrological study should be restricted to these few, or that one should be preferred to the other, but I do recommend them as a starting point.