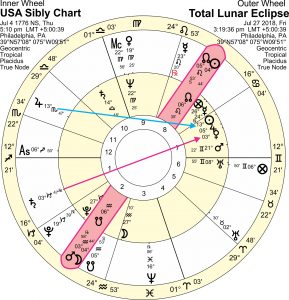 The total lunar eclipse of July 27 2018 is shown here superimposed against the Sibly chart of the USA. I have chosen the US chart as international events have a strong US focus at the moment.

Ed Tamplin has written about the importance of the nodes at these degrees, and their association with war and nuclear energy. Go to edtamplin.com for further discussion.

This eclipse occurs on the same day, although shortly after, the Sun opposes Mars. Mars is always at it’s closest point to earth at the opposition, potentially increasing the chances of conflict.  The previous conjunction was exactly a year earlier at 4 Leo, and the next in the 25 month Sun–Mars cycle is at 10 Virgo on September 2, 2019.

And also on the same day as the eclipse Mercury turns retrograde at 23 Leo. Mercury is famously associated with computer and communication breakdowns, although I have not seen any evidence measuring the frequencies of these events compared to other times.

In the US Sibly chart Mercury rules partners and open enemies. Turning turning retrograde in conjunction with this eclipse suggests revision and sudden reversals in direction regarding countries with whom the US engages.

Jupiter makes a trine to the Sun. The Sun in a mundane chart (chart for a country) is often associated with the king or ruler. In this case that would be Trump. In spite of all the troubles surrounding him it appears he has protection. ‘Teflon coated’ perhaps. Jupiter rules the first house of the country and its people, and while the media reports on their popular opposition, it appears that he has sufficient support, at least for the present.

The very close association of this eclipse with Mars, the planet associated with war and conflict, cannot be overlooked.