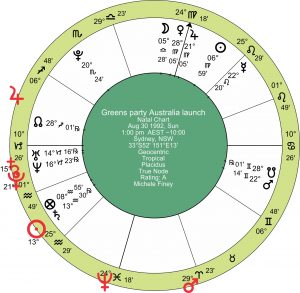 The headline of the front page article in The Age of February 03 2019 reads: Bitter greens: lawyers called in amid walkouts.

The first paragraph summarises the sad saga: The crisis engulfing the Victorian Greens has deepened, with former Batman candidate Alex Bluthal calling in her lawyers and dozens of members planning to resign in protest at her treatment.  For Greens supporters the article is heavy reading as it details accusations of bullying and a 30% drop in membership in Victoria.

Are these events reflected in the horoscope for the Australian Greens? You bet they are.

The first clue is the Sun applying to a conjunction with Saturn. Saturn is the planet of restrictions, resignations, trouble and defeat. This solar conjunction highlights Saturn‘s qualities. Of course this conjunction takes place every year around the start of February for the Australian Greens, and we don’t normally see troubles on this scale.

However when the backdrop of Pluto’s trine to natal tenth house Jupiter from the first house, and first house transiting Saturn applying to conjunct Neptune is taken into account, it becomes clearer why the Sun‘s conjunction to Saturn is especially important at this time. Repressive Saturn smothers the high ideals represented by Neptune in the first house, and offers a serious reality check.

Saturn goes retrograde at the end of April, just before it aligns with Jupiter, so perhaps there’s a reprieve.

Also by the end of April Pluto has begun its retrograde phase at 23 degrees of Capricorn, very close to a trine aspect with the Midheaven of the Australian Greens horoscope. Pluto is famous for its transformative qualities, dredging up and exposing dirt that has been hidden, deliberately or otherwise. In a year’s time in Feb 2020 Pluto makes an exact trine to this natal Midheaven, at which point we should see a significant upheaval and transformation of the Greens public image.

This is an interesting horoscope and its resonance with events suggests it is accurately timed. With Uranus close to the ascendant the Australian Greens are never likely to be a boring party. The two benefics, Venus and Jupiter, sitting astride the Midheaven, show great hope, but their lack of essential dignity suggests that these hopes may not be totally fulfilled.

Money borrowed and shared Malefic and benefic – the real meaning