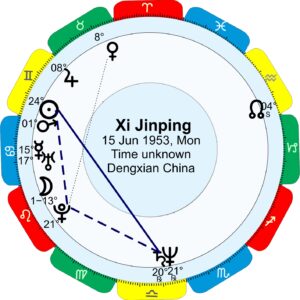 On March 11 2018 Xi Jinping became President of China for life after constitutional changes were passed by the annual sitting of parliament, the National People’s Congress, which approved the removal of the two-term limit on the presidency.  The vote was widely regarded as a rubber-stamping exercise.

Because  Xi‘s birth time is unknown the Moon‘s range is shown for its 24 hour passage on 15 June 1953. Neither are houses or the Part of Fortune shown, as these require an accurate birth time.

Like Trump, Xi Jingping has the Sun in Gemini. Their natal Suns are almost exactly conjunct, within one or two degrees. A very interesting coincidence. The Sun in Gemini suggests that there are two sides to Xi Jingping. Gemini is associated with agility, curiosity, and mental dexterity.

In Xi Jingping’s horoscope the Sun is ruled by Mercury in Cancer, conjunct Uranus, showing a very quick and intuitive mind. His Leo Moon offers warmth, charisma and a need to be the centre of attention. It also hints at the desire to lead, to dominate.

Venus is in antiscia relationship with Xi’s natal Pluto, suggesting a hidden desire to dominate. 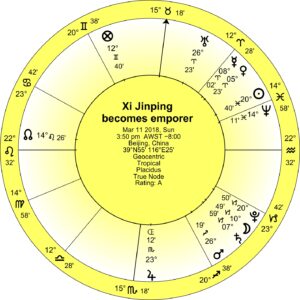 Xi Jingping’s natal Sun aspects Pluto in Leo, showing intensity, ruthlessness and the desire to dominate. It also aspects the Saturn-Neptune conjunction in Libra. Saturn is also about control and power, and together with Neptune in Libra he achieves goals with poise, balance and good judgement.  Neptune adds sensitivity and refinement, and also the capacity for deception and the use subtlety in presentation. Pluto in Xi’s horoscope sits at the midpoint between the Sun and Saturn/Neptune.

When this horoscope is progressed his natal Sun is at 25 degrees of Leo, which suggests an important life change in about 5 years time when it moves into Virgo. It is possible that he ceases to be President in 5 years time.

Ascension to presidency for life

The horoscope for his ascension to presidency for life (becoming emperor of China) is taken from various news reports. Some say 3:45 pm and some 3:50 pm. I believe this horoscope is close to an exact time.

The ascendant ruler the Sun, which also symbolizes leadership and power, aspects Pluto, suggesting an unconscious desire to dominate. This aspect echoes his own natal chart where the Sun also aspects Pluto by sextile. The Sun next aspects Jupiter, the planet of expansion.

The Moon trines the Midheaven, the place associated the highest authority. In Capricorn the Moon is cautious and well organised. It is ruled by a powerful Saturn, which in mundane (political) astrology represents law enforcement.

The ascendant for his ascension to presidency for life conjoins Pluto in Xi’s horoscope. As mentioned above his Pluto sits at the midpoint between his Sun and Saturn/Neptune.  And the Uranus-Mars trine in the ascension horoscope trines Xi’s natal Pluto. Jupiter, the planet of expansion, also links with his Pluto.

Even without a time of birth for Xi Jingping we can see that the horoscope for his ascension to presidency for life links remarkably to his natal Pluto, which represents the unconscious drive to dominate and control.

And when we check the horoscope for China, is there a link the degree of natal Pluto in Xi Jingping’s horoscope? You can bet there is. But that’s a story for the next article.