Is the dark Moon the new Moon? 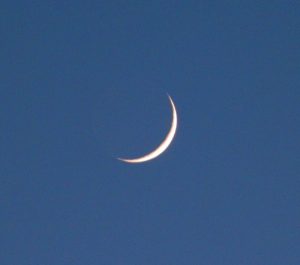 The alignment of the Sun and earth with the Moon in between means that the side of the Moon that faces Earth in completely dark. Technically, this is called a conjunction or syzygy.

The darkened Moon rises and sets close to the Sun,  making it impossible to see due to the Sun’s glare.

In horary astrology we would say that the Moon is combust, and whatever or whoever is represented by the Moon in a horoscope is hidden or blinded.

About a day after the dark Moon conjunction, the Moon becomes visible again as a waxing crescent Moon. The new Moon is the appearance of the thinnest sliver of the crescent Moon. In the Islamic calendar this is the new Moon which defines the beginning of the month. 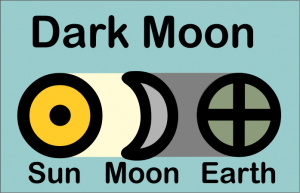 Observation and the visibility

Astrology is based on observation and the visibility of light. It really doesn’t make sense that the dark Moon is the new Moon. There’s nothing new about the dark Moon, nothing to see.

This is not the time when something has been given birth. Just as a baby is only born when it leaves its mother and becomes visible in our world, so the Moon can only be new when she first becomes visible.

Reflections on our life cycle

The lunar cycle reflects the cycle of our lives. The first sliver shows the infant, the first quarter burgeoning youth, the full Moon the high of our powers, the third quarter our middle years, and the waning Moon our decline into old age and death. At the dark phase the Moon is hidden, conjoined with the Sun in private. Then the new Moon is born again and the cycle repeats.

Have astrologers been getting it wrong all this time?

Well not all astrologers all of the time. In ancient times the new Moon was taken to be when the first sliver appeared, as Robert Zoller mentioned in his lessons.

However in my experience the vast majority of astrologers call the dark Moon the new Moon. I was taught this when I began astrology and I don’t know many astrologers who use the appearance of the first sliver as the new Moon.

When does the new Moon occur?

About a day after the dark Moon is the answer. Astronomical observation is used to time the months in the Islamic calendar. A new month can only begin after a waxing crescent Moon is observed shortly after sunset. We can take this as one day , or 24 hours, after the dark Moon.

Since the Moon moves approximately 13 degrees in 24 hours, it’s an easy adjustment. In the 1980’s I was taught that the house where the new Moon falls in one’s horoscope shows the nature of new beginnings for that month. In many cases this will be the same house as the dark Moon, and in others it will be the next house.

The writers of many astrological web sites and publications confuse the dark Moon with the new Moon,  and I expect considerable push-back to the suggestion that their prognostications for the coming month are based on an incorrect time and degree of the Moon. This is more likely to be the case when there are perceived financial implications or reflections on one’s status or expertise.

However were are all in this together and I’m sure the more open minded, and perhaps younger astrologers, will make an adjustment when new evidence suggests there is a better approach. These are the astrologers who I believe deserve real respect.

1 thought on “Is the dark Moon the new Moon?”