USA and the Mighty Sun 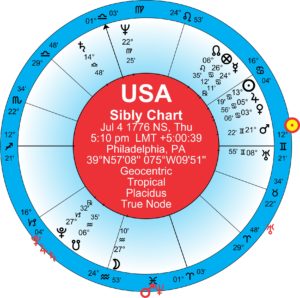 In my June 1st post: USA Sun square Mars, I discussed the Sun’s conjunction with the Asc axis of the US Sibly horoscope, and the simultaneous Mars square to this axis. The Sun was square Mars.

Now as the transiting Sun separates from its square to Mars the violent outrage and expression of anger that swept the US late May early June has shifted to a focus on Confederate statues as the Sun squares Neptune. While violence still lingers, its extensive outpouring coincided with the Sun square Mars transit.

Over the next couple of days the Sun squares transiting Neptune and conjoins Mars in the Sibly chart, which itself hosts a Mars square Neptune aspect, doubling up on the Mars-Neptune theme. Neptune has associations with images, portrayal, as well as deception, and glamour. Mars represents the anger directed at these images.

The mighty Sun is the most powerful body from an astronomical and astrological perspective and its transits are often overlooked and underestimated. After all it gives us its light and life, directs the motions of the planets, creates the aspects and the dignities and provides the underlying structure of the horoscope.

However in modern astrology the Sun is usually relegated to the status of a ‘personal planet’ and consequently regarded as less important. Most attention is focused on the outer planets which grind away at the same degree area for months on end. For example Pluto’s average yearly motion is about 2 degrees. Yes Pluto transits coincide with intense times and often major change.

However if the Sun hovered over the same 2 degree area for a year we would witness total burn-out, combustion and utter destruction. Could Pluto’s apparent power may be simply a function of its long focus on the same degree area, rather than any natural power of its own? Have mainstream astrologers got it wrong all this time?