You are here: Home / Predictions 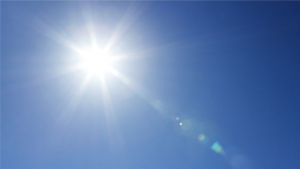 Honesty in astrology is relevant to issues relating to prediction. It’s a relatively common experience for some astrologers to have a problem with clients whose expectation is strictly fortune-telling.
p
These  astrologers typically offer clients a general timing on the sorts of things that manifest from transits and can’t or won’t give clients concrete predictions. They take on clients wanting specific answers to questions. The client’s confusion is understandable:
p

“If the astrologer was able to provide me with an accurate time frame for when some issue was going to manifest then why can’t the astrologer give me an exact prediction of what will happen?”

Some astrologers get annoyed and indignant when clients call expecting only fortune-telling. It’s especially difficult when these expectations and subsequent disappointments only surface during a reading. What to do? Abort the reading?
p
In this situation the client is often encouraged to recognize how their actions and attitude shape future events, and how more self-awareness will improve their capacity to achieve their goals. This exercise can be quite draining for the astrologer, especially if the client is not really motivated towards self-development and simply just wants to know what’s going to happen. At this unfortunate point both the astrologer and the client can be feeling frustrated.
p
In the process of attempting to convince the sometimes resistant client that self-awareness is the best path, many astrologers attempt to empower the client with statements about their potential and that anything is possible. Sometimes the astrologer wants to impose their own belief systems or therapies. And there are complicating diplomatic factors, such as the client’s desire to please the astrologer, and to agree to what is being proposed, at least until they are out the door; and when they get home they struggle to recall what predictions the astrologer actually made and generally forget suggestions relating to self-awareness.
p
Personally I have no issue with self-development or empowerment. However if this is not what the client is seeking frustration can be experienced by both parties during a reading.
p
Regarding issues about prediction, providing a general timing about likely developments is as much a prediction as anything else, even if referenced to concepts such as free will or self-empowerment.
p

Walk the talk: The initial contract

Astrologers who offer only a general timing about future developments and encourage their clients to be responsible for what they attract yet experience problems themselves when they attract the wrong sort of clients, might need to be more congruent in their communications. To avoid  potential problems these astrologers could be more responsible for the type of clients they attract. One way to do this is to be very clear when a client first asks about a reading and make a clear statement about what is offered and what is not offered.
p

Statements like this are like a contract and set the tone for what follows. The initial contact is the moment of opportunity to dispel any illusions about services are being offered, particularly around issues relating to prediction. Clarity at this point minimizes misunderstandings.
p

The challenge for astrologers whose training doesn’t equip them with the skills to provide clients with concrete answers is the need to make a living. Astrologers tend to draw their clients from the large pool of people wishing to know about future events as well as the smaller sub-group who are willing to examine how they attract certain events. The smaller sub-group offers less financial reward for the astrologer’s business. Integrity can be tested.
While many astrologers can offer excellent insights into how the future can be shaped according to the client’s personality as described by the horoscope, this is often lost on the client, and not wanted. True but unfortunate. It can be very tempting to be vague about what is offered in the hope of making more money. And it takes a certain courage and integrity to be very clear about what is being offered, even if such clarity means less income.
p

When there’s a history of mismatches between clients’ expectations and the service provided it suggests the astrologer needs to be clearer about what is and is not offered. Of course it might simply be a communication issue. The downside with direct honesty is that clients may be lost and less income received. There’s the obvious temptation is to be a little vague in order to bring in more clients. The upside to honesty is a sense of integrity.
p

Aside from the choice to be directly honest or somewhat vague, a third option for the astrologer who is only able to provide a general timing on likely events is to get training in astrological techniques that provide specific answers to most questions. This is where horary astrology comes into its own. I highly recommend this training.
https://westernastrology.net/wp-content/uploads/Joy-ogo-300x300.png 0 0 Peter Burns https://westernastrology.net/wp-content/uploads/Joy-ogo-300x300.png Peter Burns2018-10-26 02:02:202018-10-26 02:09:24Honesty Prediction and Self-empowerment 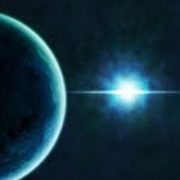 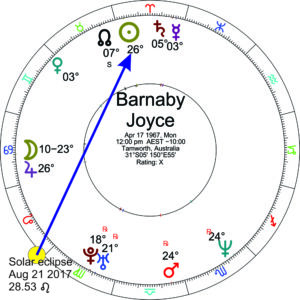 Looking back to the previous solar eclipse prediction

Back in August I wrote about Australia Deputy leader Barnaby Joyce’s horoscope and whether it indicated he might have dual citizenship and therefore would need to step down from parliament.

I have no birth time so I used the thema mundi chart set for noon, shown here without houses, with the Moon’s movement on his birthday between 10-23 of Cancer.

The solar eclipse of August 21 2017 aspected his Sun with an orb of 2-3 degrees, the maximum orb allowable, highlighting his natal Sun, arguably one of the most important points in any horoscope.

Solar eclipses are associated with unexpected surprises where hidden lunar forces are released and the situation changes very quickly. 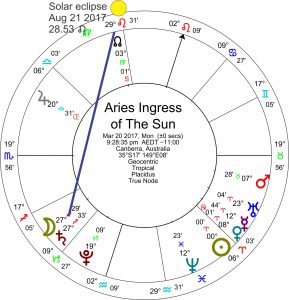 The 11th house cusp is closely aspected by the Moon, which represents the high court, and Saturn which rules the opposition because it rules the sign opposite to the government’s 10th house.

He was forced to stand down, had to compete in a by-election, and was re-elected. Note his Sun-Mars opposition. he is a fighter. Not that Mars is in great condition in Libra but he knows how to relate to people and anticipate others’ reactions. 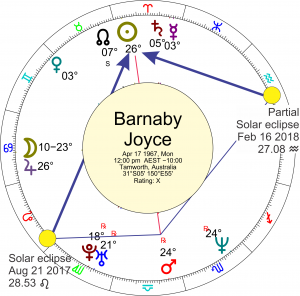 Fast forward to the present and the partial solar eclipse of February 15-16 again aspects his natal Sun. Again he is serious trouble, this time because of an affair and it’s reflection on his support of traditional family values. His reputation has in a sense been partially eclipsed.

On the morning of the eclipse (Australian time) there was talk of mutiny against his leadership in the news media. Two days prior he needed to correct his record of participation in the Army Reserve. f

On the left is Barnaby Joyce’s horoscope with the Feb 2018 partial solar eclipse added. Again both his natal Sun and Mars are activated.
It is interesting that the Feb 2018 eclipse sits on the fifth house cusp of the 2017 Aries Ingress of the Sun horoscope for Australia. Tanya Plibersek is Labor’s deputy leader, and has entered the debate on Joyce’s affair on a different note, declaring that what he does with his personal life should remain private, but that his use of taxpayer funds in moving Vikki Campion, the staffer he had an affair with, into different jobs, should be made fully transparent.

Barnaby Joyce’s horoscope also shows his natal Saturn at 5 Aries, which means transiting Saturn is squaring his natal Saturn. Saturn aspects bring a test and the need to face facts, and are often associated with issues of maturity, failure, the need to face reality, the need to take responsibility for something, and frequently career issues and for older folk, questions about retirement. He is now needing to run two families and is said to need to keep his job to pay for his various expenses. No doubt he will fight hard to resist retirement from public office. 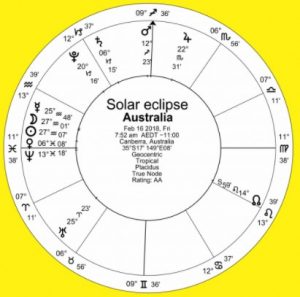 In more recent news it is claimed in the media that a crisis has developed between the governing parties because of comments made by the PM Malcolm Turnbull and the backlash from Barnaby Joyce.

In the horoscope shown on the left for the Feb 15-16 2018 partial solar eclipse for Australia the aggravation for the government is shown by Mars conjunct the Midheaven. The government and its leader Malcolm Turnbull are shown by the tenth house ruler Jupiter, which is square the eclipse at 22 Scorpio. Turnbull is in a difficult position.

The deputy leader, Barnaby Joyce, is shown by the eleventh house ruler which is Saturn in Capricorn. Venus, the planet representing relationships and young women, aspects Saturn by applying sextile within 7 minutes of arc, which is descriptive of the deputy leader’s affair with his staffer.

The eclipse itself falls in the twelfth house of matters hidden, of entrapment, and self-undoing. Neptune, the planet of illusion and deception, is just within the first house, in tight square aspect with Mars on the Midheaven.

The horoscope for the solar eclipse describes the situation in Australia very well and shows government leadership in crisis.

With news that Barnaby Joyce may have dual citizenship and therefore may have to step down from parliament I decided to have a look at his horoscope.

I have no birth time so I have used the thema mundi chart which is set for noon and shown here without houses and the Moon’s movement through his birthday is between 10-23 of Cancer.

The solar eclipse of August 21 2017 aspects his Sun with an orb of 2-3 degrees. While this might be considered to be the maximum orb allowable it does highlight his natal Sun, arguably one of the most important points in any horoscope.

Solar eclipses are associated with unexpected surprises where hidden forces are released and the situation changes very quickly. In the context of Barnaby’s position as deputy leader of Australia and the challenger to his right to hold that position this eclipse suggests that his tenure is under serious threat.

The 11th house cusp is closely aspected by the Moon and Saturn. Saturn rules the opposition because it rules the sign opposite to the government’s 10th house, and the Moon as 9th house ruler represents the high court.

It does not look good for the government or for Barnaby Joyce. Based on the relationship between the solar eclipse with Barnaby Joyce’s horoscope and the 2017 Aries Ingress horoscope  for Australia it is most likely that Barnaby Joyce will be forced to stand down.