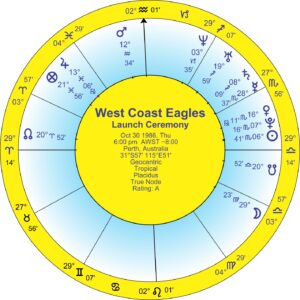 Shown on the left is the horoscope for the West Coast Eagles (WCE) AFL football team, who are playing Collingwood in the 2018 AFL grand final today. WCE’s name and colours were celebrated at it’s official launch in Perth Western Australia October 30 1986. I spoke to a reporter afterwards who verified the opening time when proceedings commenced as 6 pm.

Note the powerful stellium of planets in Scorpio, and especially the Sun-Pluto conjunction, trined by Jupiter in Pisces. This suggests intensity, focus and power, and in it’s AFL brief history the WCE have been a very successful football team. These 4 planets are ruled and squared by Mars high in the chart in cold clinical and objective Aquarius. At their best the WCE are known for their precision and detailed preparation, evidenced in this horoscope by the Virgo Moon.

Below is the horoscope for Collingwood, details sourced from wikipedia. There is no recorded time for this horoscope, and therefore houses are not shown, or Part of Fortune, and the Moon is shown for it’s possible 24 hour range. It most likely position is in late Libra, if proceedings were conducted during the day, or in early Scorpio for a post 6 pm beginning.

It’s interesting that in 1994 and 2006, when the WCE previously won the premiership flag, Jupiter, the planet of success, was in Scorpio. Again it is in Scorpio now, although at a later degree, at the Mercury Venus midpoint. Jupiter passes through each sign once every 12 years. The WCE also won the premiership in 1992 when Jupiter was in late Virgo, which does not fit this neat pattern. However the Moon in the WCE horoscope is in late Virgo, so there is good correspondence. 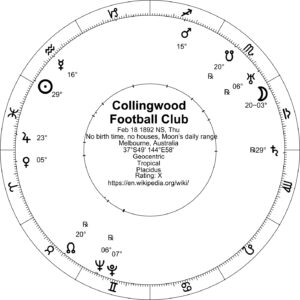 Regarding Collingwood’s last premierships, in 1990 and 2010, Jupiter was in early Leo in 1990, trining natal Venus, and in late Pisces in 2010, applying to a conjunction with natal Jupiter. At this 2018 grand final Jupiter is making a trine to natal Jupiter, which is a positive indicator.

It is a very complex task to analyse the various horoscopes for each club, including their respective leaders and leading players. I have only checked the horoscope for Eddie McGuire, President of the Collingwood Football Club. He was born October 29 1964, no known birth time. On this grand final day he has Mars square Mars, and Jupiter opposite Jupiter, and Moon squaring Saturn and Mars. None of these are positive indicators.

I don’t have the hours of time required for a thorough analysis, which is necessary to make an accurate prediction. A cursory look suggests advantages to both sides, with the balance favouring WCE.

Just in case you missed it, the West Coast Eagles won their 4th premiership flag yesterday, the 4th in their 32 year history. This is a team with 4 planets in Scorpio, including a Sun-Pluto conjunction, responding consistently to Jupiter’s passage through Scorpio every 12 years. Jupiter has long been called the planet of success.
The exception to this Jupiter in Scorpio pattern was 1992 when Jupiter was in Virgo, conjunct natal Moon at 29 Virgo.
Some say astrology doesn’t work. I beg to differ.