Solar eclipses are associated sudden reversals of power, often involving leaders and powerful authorities. Eclipses in general have a negative reputation and are generally regarded as unfortunate.

During a solar eclipse the light of the Sun is cut off.

The Sun is the supreme ‘Commander-in-Chief’, the symbol of might and mastery, power, truth, light and enlightenment. The superior planets stop and station when aspected by trine to the Sun, and genuflect and step backwards in retrograde motion when they come face to face in opposition with the Sun. All the planets disappear in his blinding light when in conjunction with the Sun.

When the Moon eclipses the Sun hidden forces, represented by the Moon, can reshape the political landscape. The Moon represents the people and popular movements, or energies which are hidden and seeking expression and resolution.

The above horoscope is set for Washington as issues concerning America are very pertinent at this time. Opposing the eclipse is Pluto, which represents intense focus, plutocracy and matters associated with wealth, and the use and abuse of power.

Shown below is the eclipse horoscope superimposed over the horoscope of the USA (Sibley chart). The eclipse falls in the eighth house of ‘other people’s money’. At the time of writing the US President is in Europe pressing for European countries to contribute more money to defense, arguing that the burden falls too heavily on America. 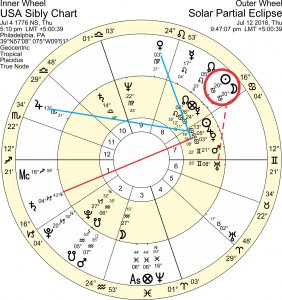 The eclipse makes an antiscia aspect to Uranus in the USA horoscope, indicating the possibility of change and perhaps breakup of alliances. Antiscia aspects generally indicate hidden motives or forces at work. The word ‘antiscia’ means shadow.

In this brief article I have only had time for a quick look at one aspect of the current international situation.

In your personal horoscope check