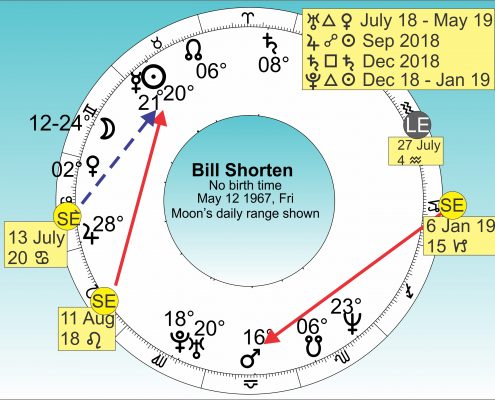 On Saturday June 16 I mentioned in my public lecture at the Victorian Astrologers Association (VAA) the possibility that Bill Shorten’s leadership of the Labor party might be coming to an end. The lecture subject was Eclipses 2018 and my main focus was matters concerning Donald Trump and international politics. Towards the end of the lecture I spoke briefly about Australian politics.

I mentioned that in the next month and a half the Sun Bill Shorten’s natal chart is hit by two solar eclipses and some important planetary transits. Since that lecture Bill Shorten has reversed his “Captain’s Call” decision to repeal tax cuts for businesses, as Anthony Albanese has refused to rule out a leadership challenge. This embarrassing back-down is set against a backdrop of an impending ‘Super-Saturday’ of five by-elections on July 28, the day after a lunar eclipse at 4 Aquarius. Mars and Uranus, associated with sudden unexpected developments, aggravation and breakups, connect with this eclipse.

Four of the five seats belong to Labor. The results in two of them will be crucial for Mr Shorten’s standing and leadership. By-elections normally go against the incumbent government, but would put Shorten under pressure if the Coalition does well. The election are ‘book-ended’ by two solar eclipses  and coincide with the lunar eclipse between these solar eclipses.

The first solar eclipse occurs on July 13 at 20 degrees of Cancer, sextiling Shorten’s natal Sun, coinciding with an opposition from Pluto. Pluto aspects show intense pressure and difficult choices. The Sun has to do with personal identity and focus.

The second solar eclipse occurs on August 11 at 18 Leo, squaring Shorten’s natal Sun. This is the same degree as the 1999 total solar eclipse which swept Europe and coincided with the emergence of Putin and the ‘Arab Spring’ revolutions,  the effects of which are still reverberating in Syria. In August 2018 Mercury will be retrograde during the eclipse, perhaps adding to confusion.

Other important transits the Shorten’s natal chart include the trine from transiting Uranus to Venus, suggesting changes in alliances and relationships. Jupiter, the planet of escape and adventure, opposes his natal Sun in September. The Saturn square at the end of 2018 and the trine from Pluto in the new year both hint at important changes in Shorten’s life. 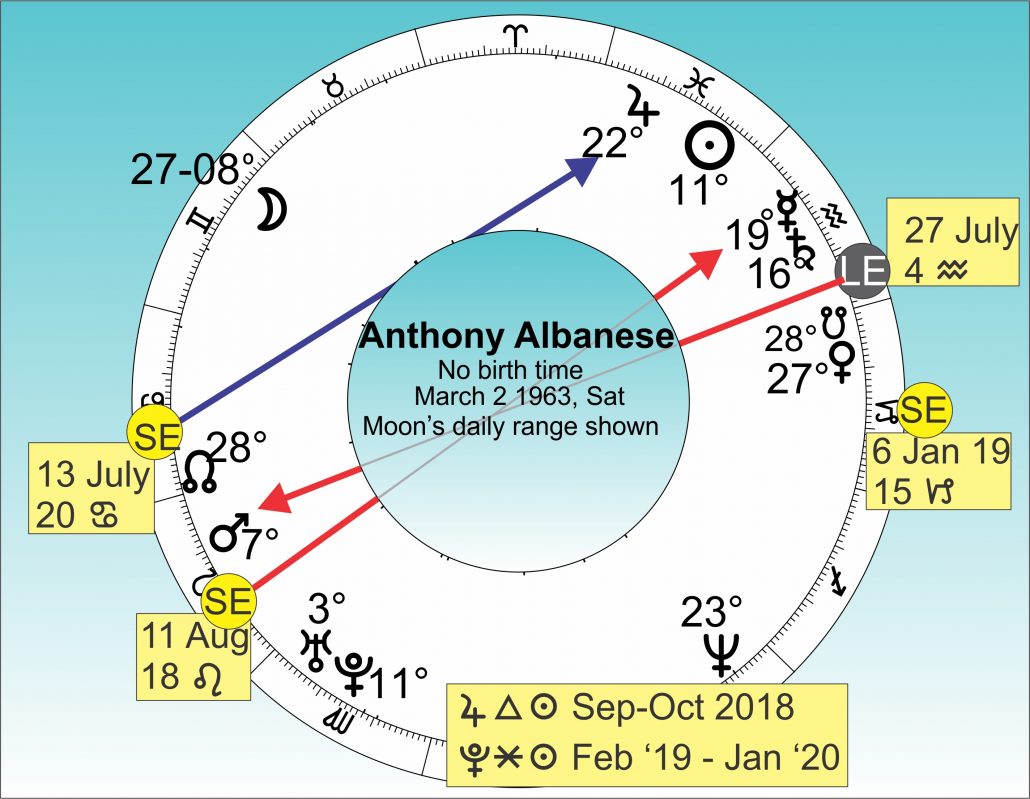 The natal horoscope for Anthony Albanese, who some say is an alternative leader to Bill Shorten, again has no exact birth time. It also shows associations with both solar eclipses mentioned above. The first eclipse trines his powerful Jupiter in Pisces, which is also the exalted eclipse ruler. This is a positive indicator. The second solar eclipse opposes natal Mercury, the planet of communication, which is less positive. However through September-October 2018 Jupiter trines Albanese’s natal Sun, indicating a fortunate time.

Will I get my laptop back? Solar eclipse at 20 Cancer